You’ve seen the shots on Instagram, you’ve booked your trip to Barcelona and now you want to find those Insta-famous spots for yourself. I’ve got ya. I spent ages researching the famous locations I wanted to hit up, and those that aren’t as well-documented.

Use this guide to the best Barcelona Instagram spots for your trip and discover some of the more unusual instagrammable places in Barcelona too!

This is one of those Instagram spots in Barcelona that’s getting more and more popular, especially for sunrise and sunset views over beautiful Barcelona. This is a bit of an uphill climb but totally worth it! Follow the Ctra. del Carmel road uphill (it’s the road outside the East Entrance of Park Güell) then Carrer de Mühlberg road until you see steps on your left just after the bend (there’s also signs). Follow this footpath and you will come out at the top of the Bunkers. 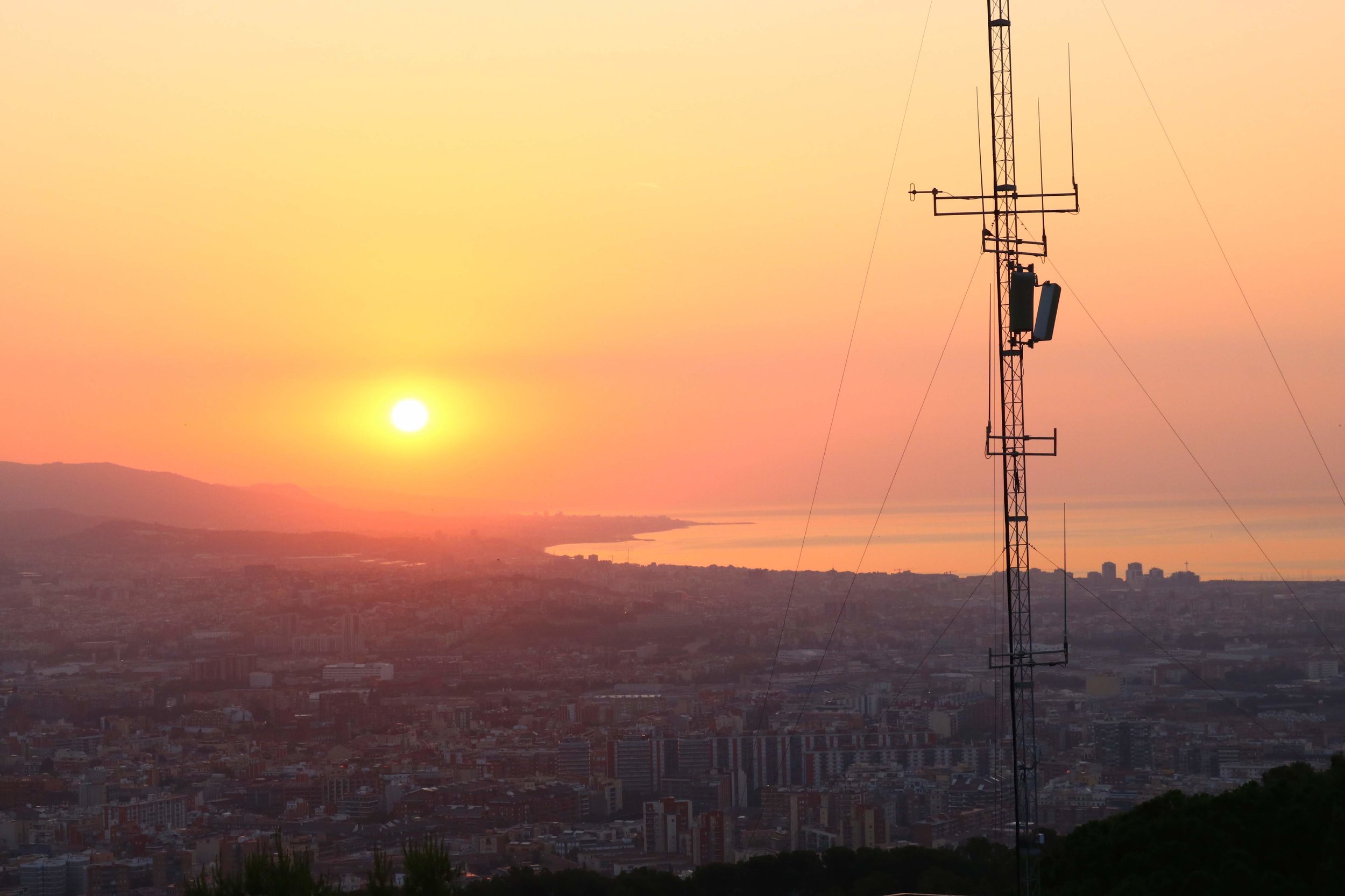 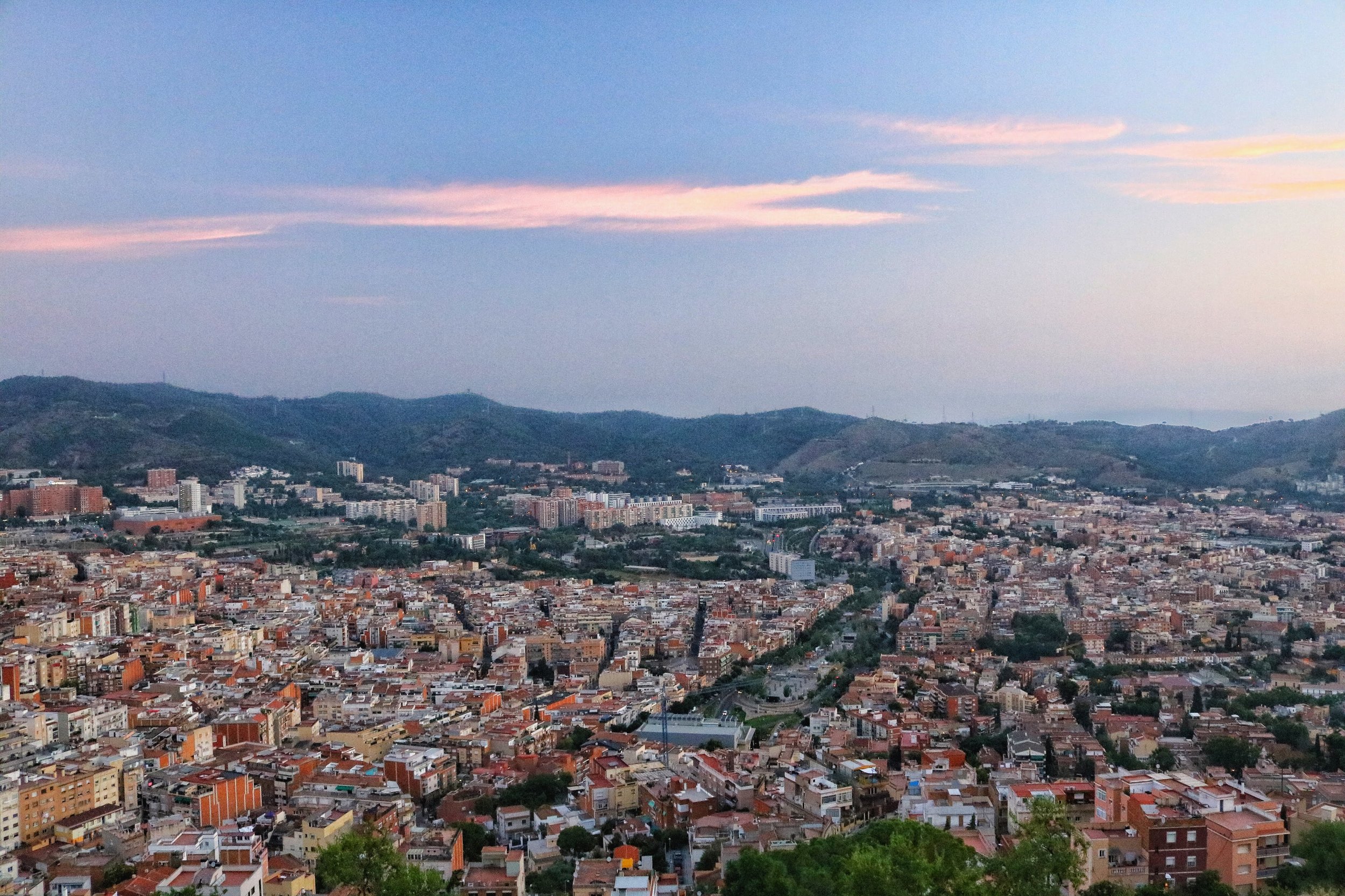 Obviously Park Güell had to make it onto the list of Instagram places Barcelona has to offer! But that’s because it’s so close to Bunkers that it’s the perfect stop on your way down from seeing sunrise at the Bunkers because then you’ll miss the crowds and see the famous Monumental Zone of the park before the tours arrive after 9am. Even at 7am the park was already busy so head to the famous Monumental Zone first (make sure to book online ahead of time here).

After you’ve snapped the famous views and enrapturing mosaics make sure to spend some time wandering around the actual park because there’s some really beautiful and peaceful paths and more to the park than you would think from just the insta-famous shots.

TIP: Check the park website before you go for building renovations. There was a huge amount of building and renovation work going on when i visited and while the park is beautiful as a whole it wasn’t quite what I expected from the photos I’d seen. 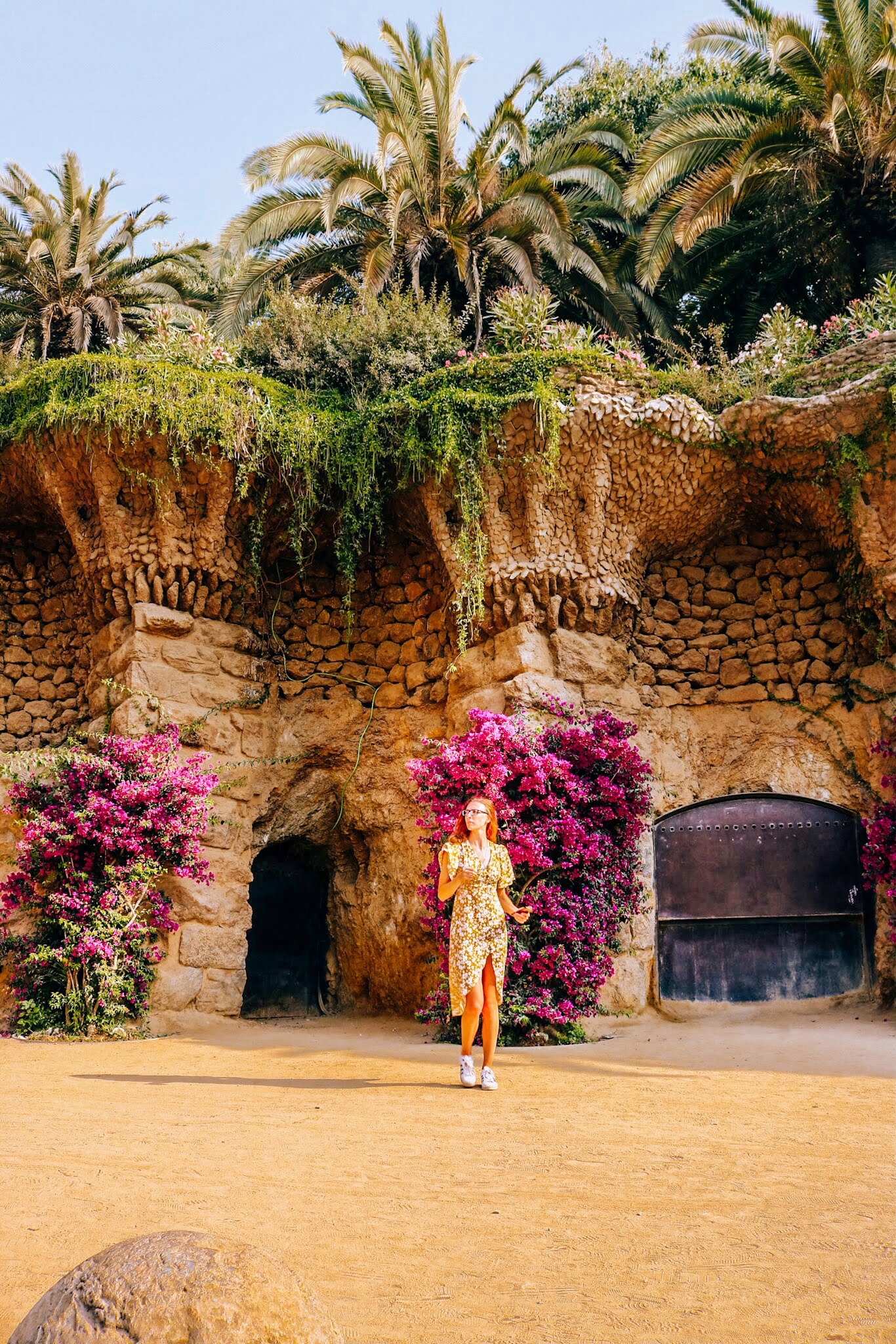 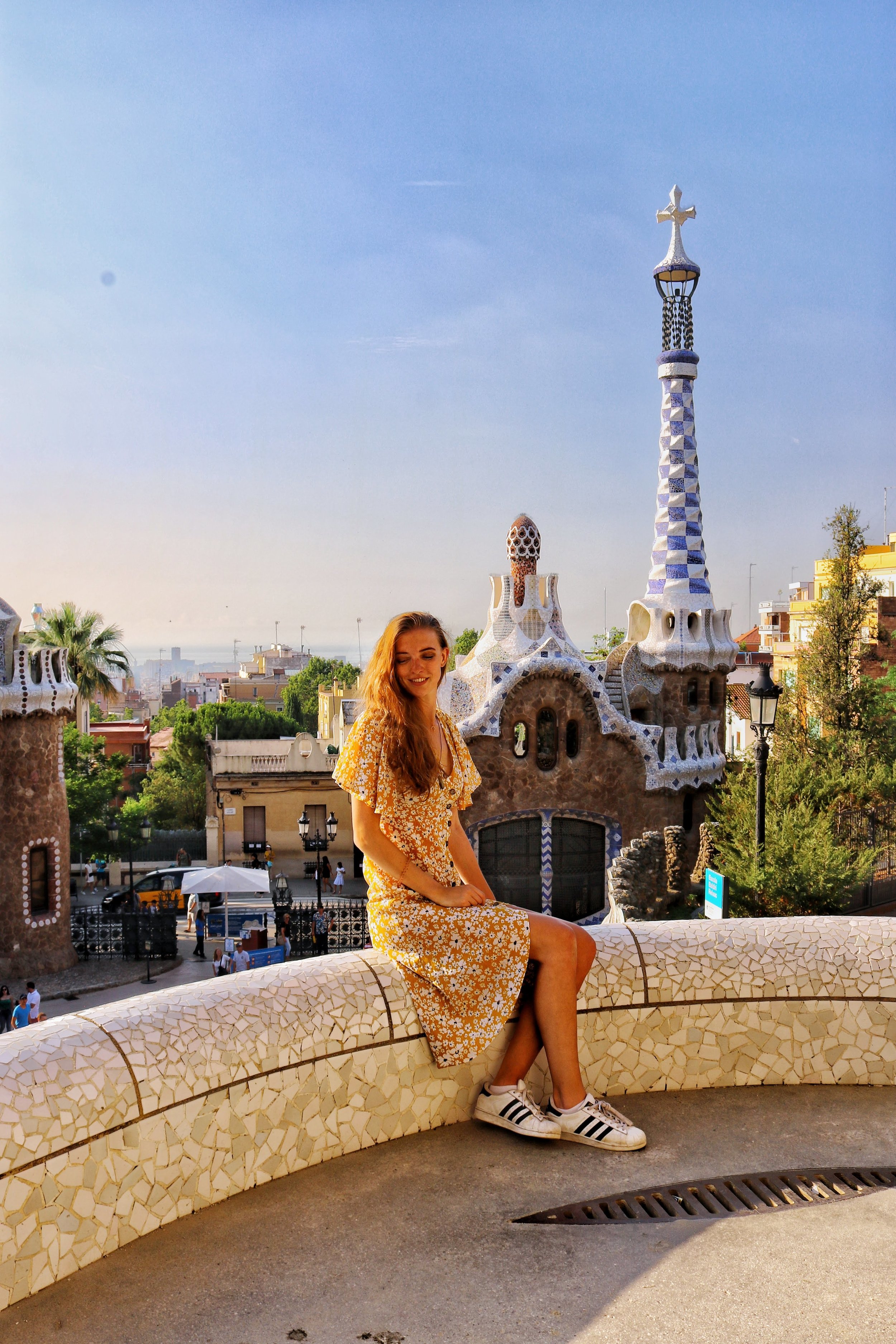 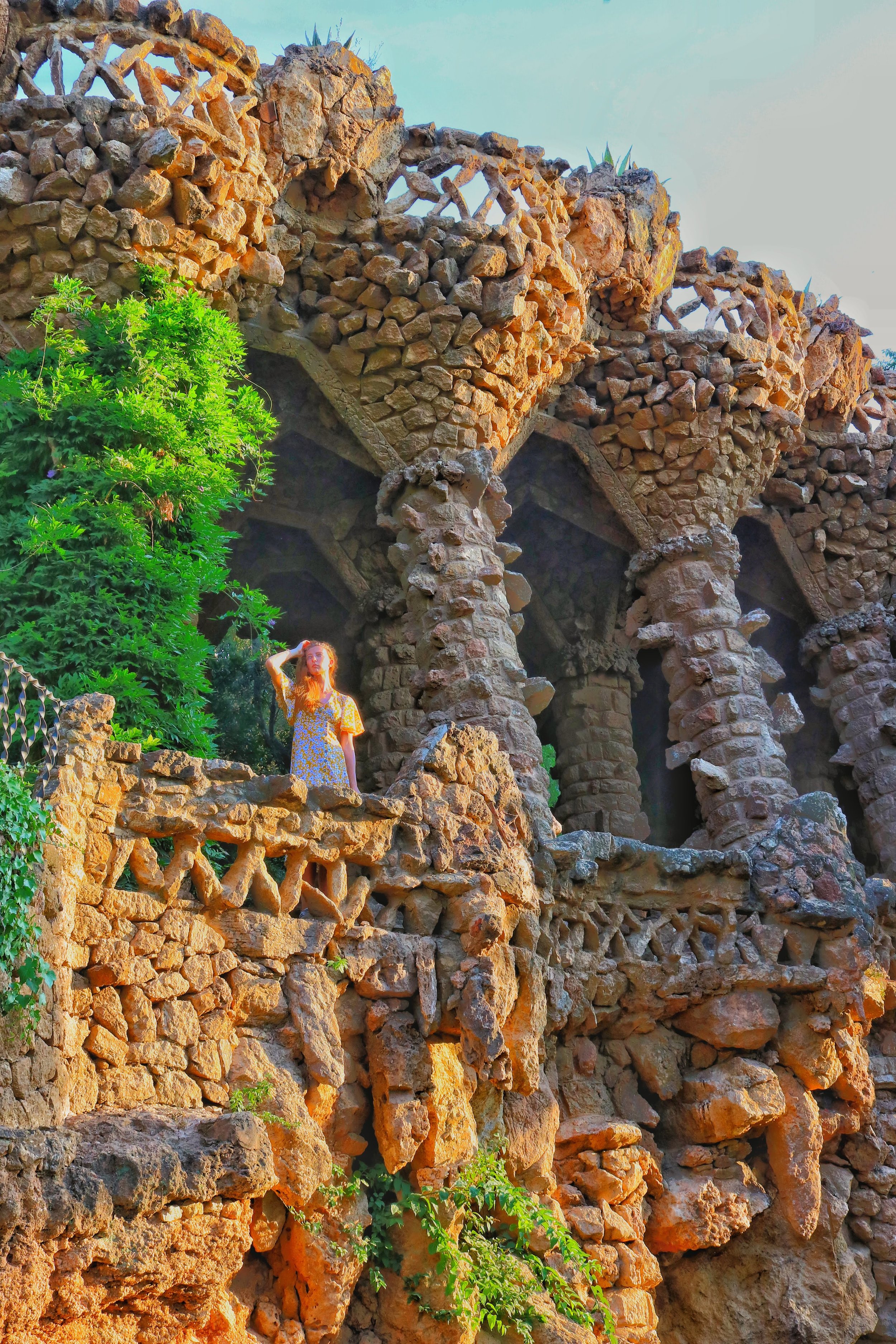 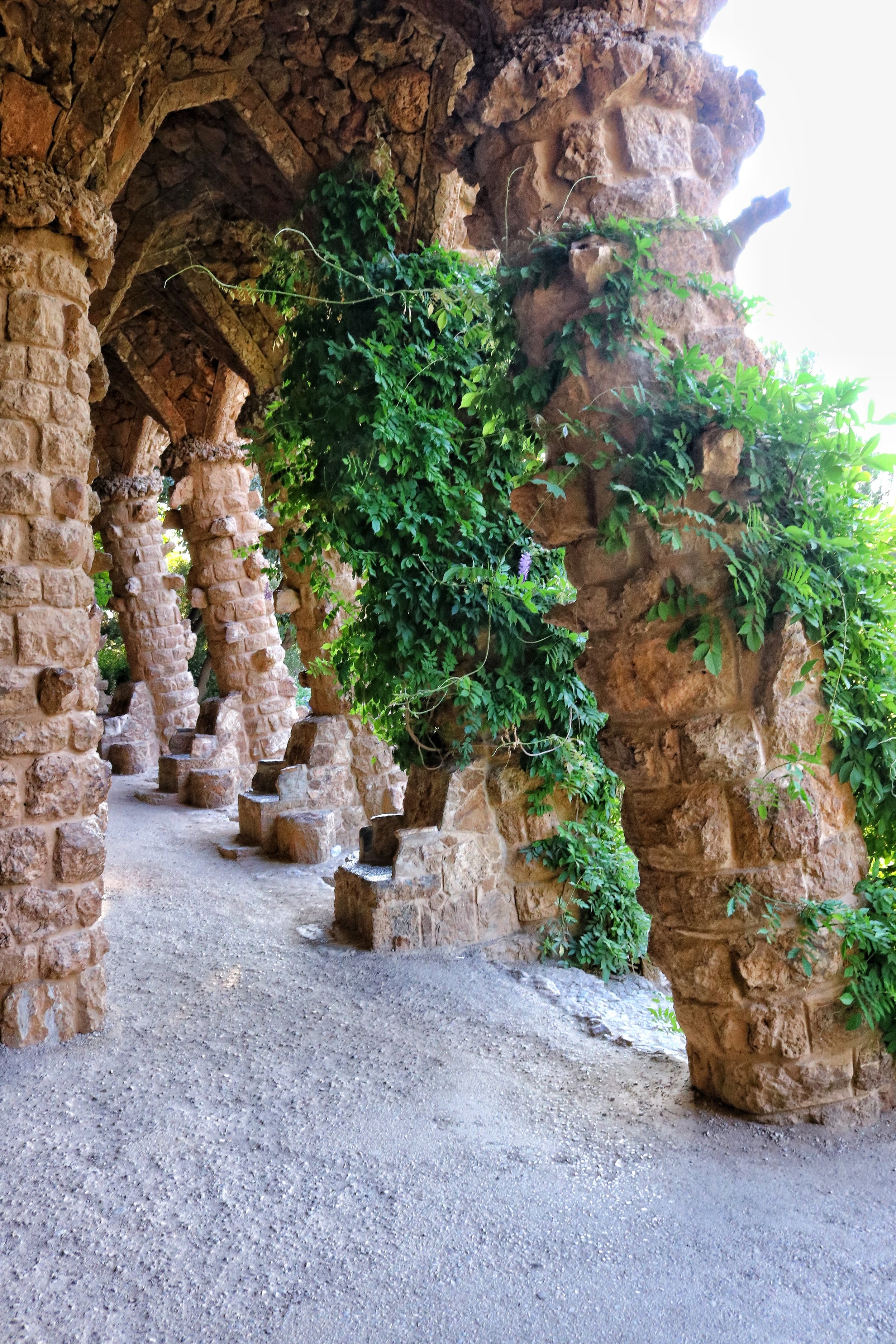 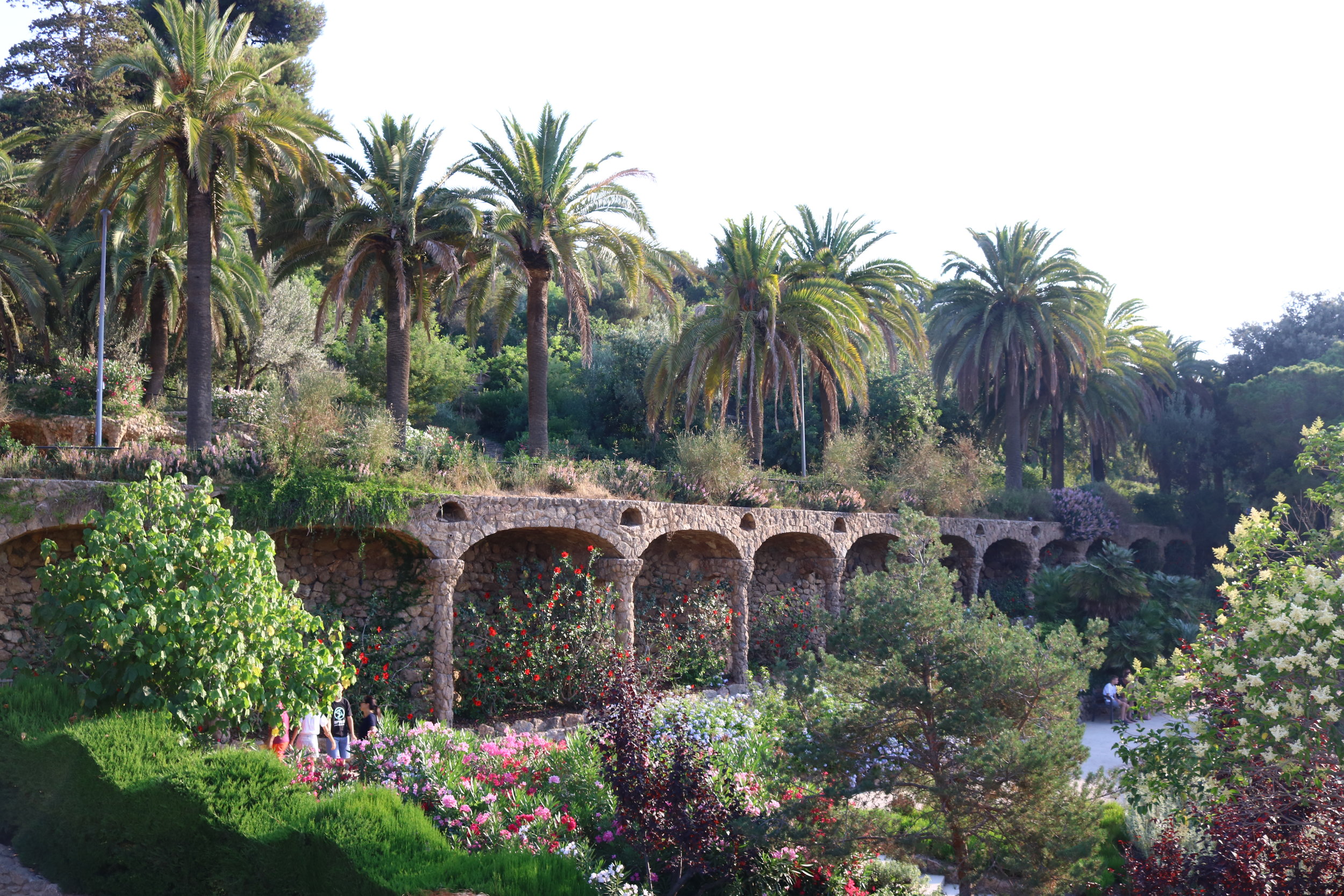 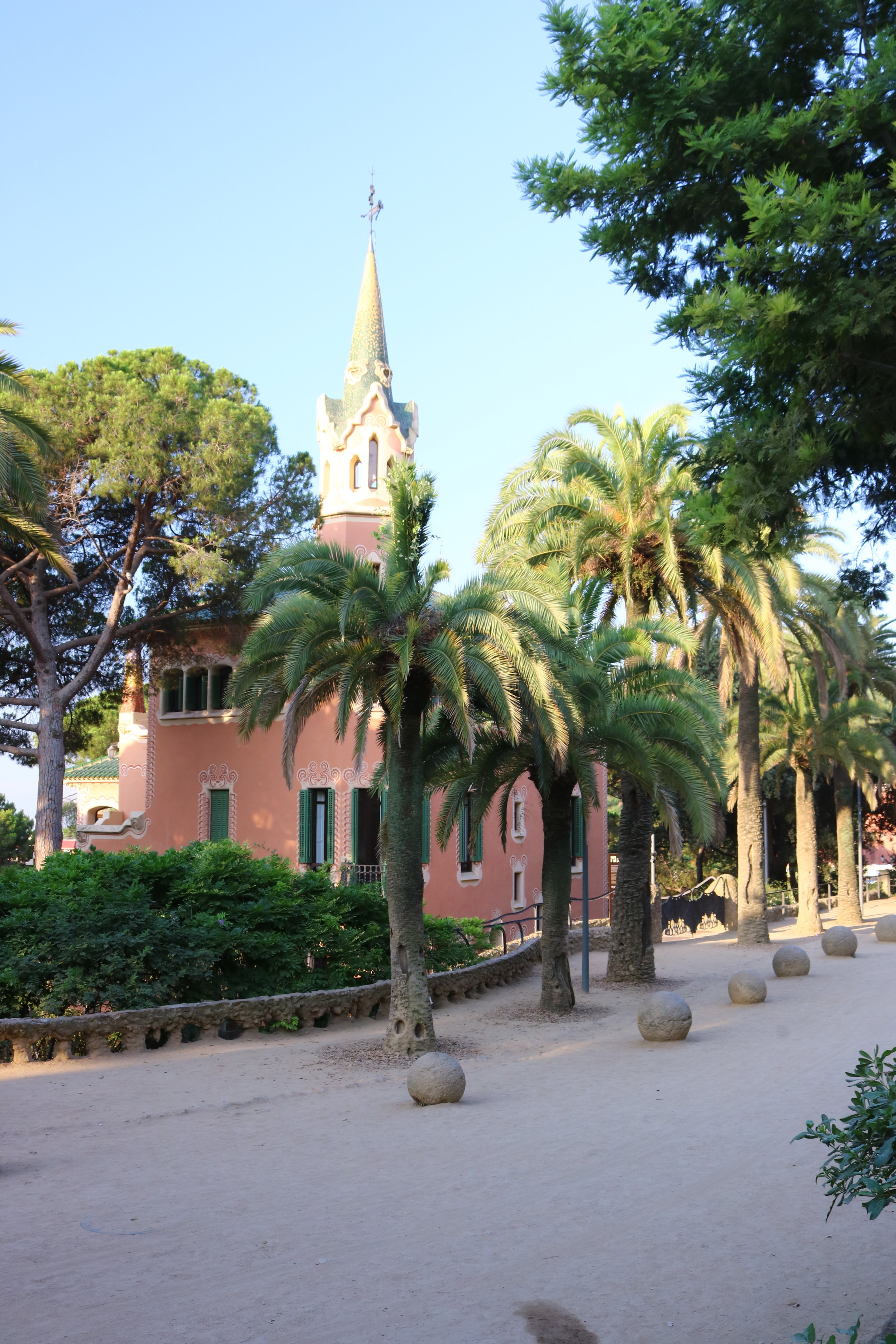 Now you’ve heard of Casa Batlló and you’ve probably even bought tickets to visit it and don’t get me wrong, it is worth visiting. But my FAVOURITE of all the Barcelona Instagram spots and a Gaudi discovery that completely surprised me on my trip to Barcelona was Casa Vincens.

It has only been opened to the public since November 2017 after a huge amount of restoration and boy was it worth visiting. The middle eastern and Moroccan influences on Gaudi’s design blew me away.

Since this house isn’t as well know as Batlló or Mila it really isn’t too busy at all, making it easily one of the most instagrammable places in Barcelona with the crowds! Casa Vicens is in the upcoming Gràcia neighbourhood, a bit out the city but with some awesome food spots to reward you for the effort! 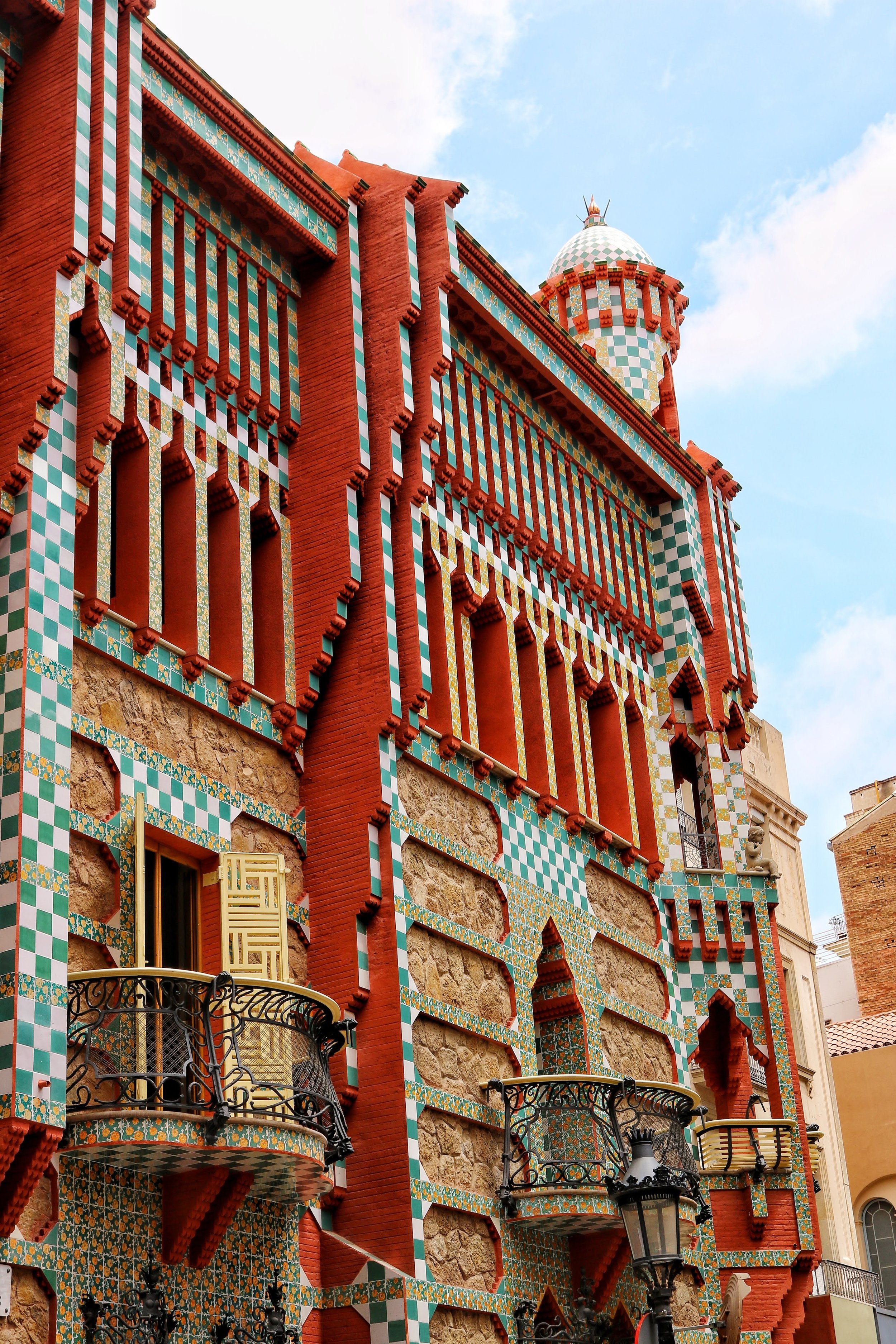 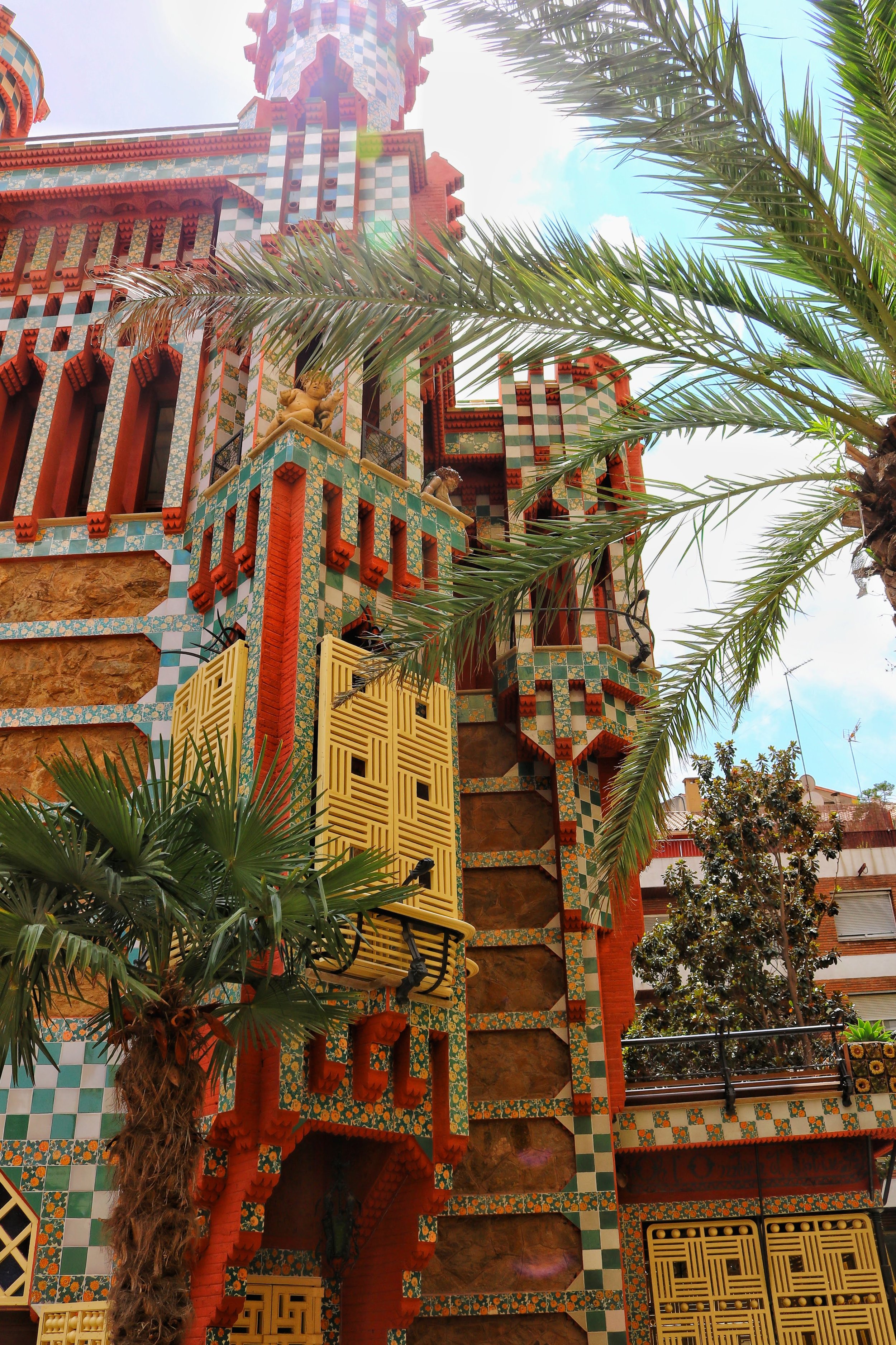 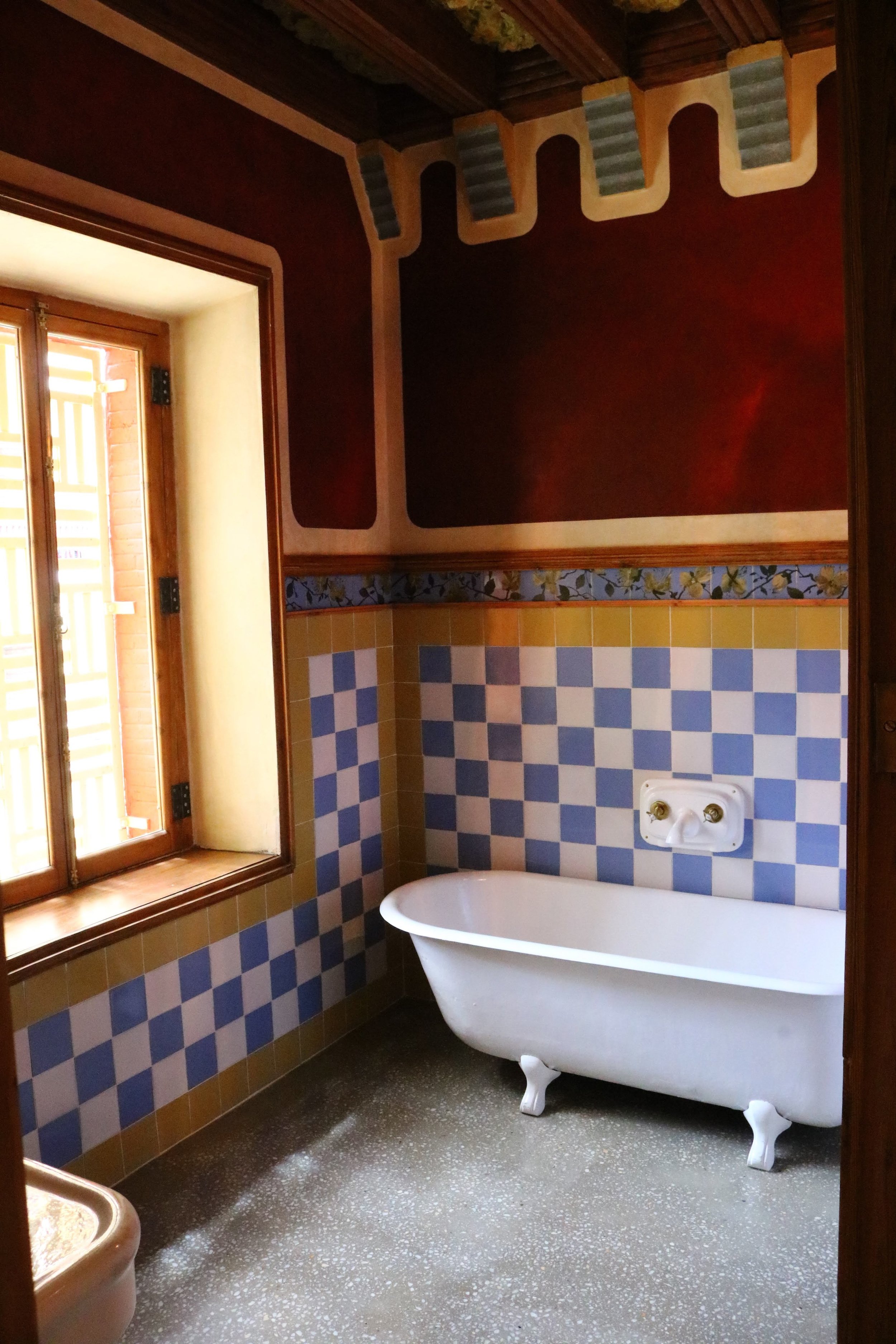 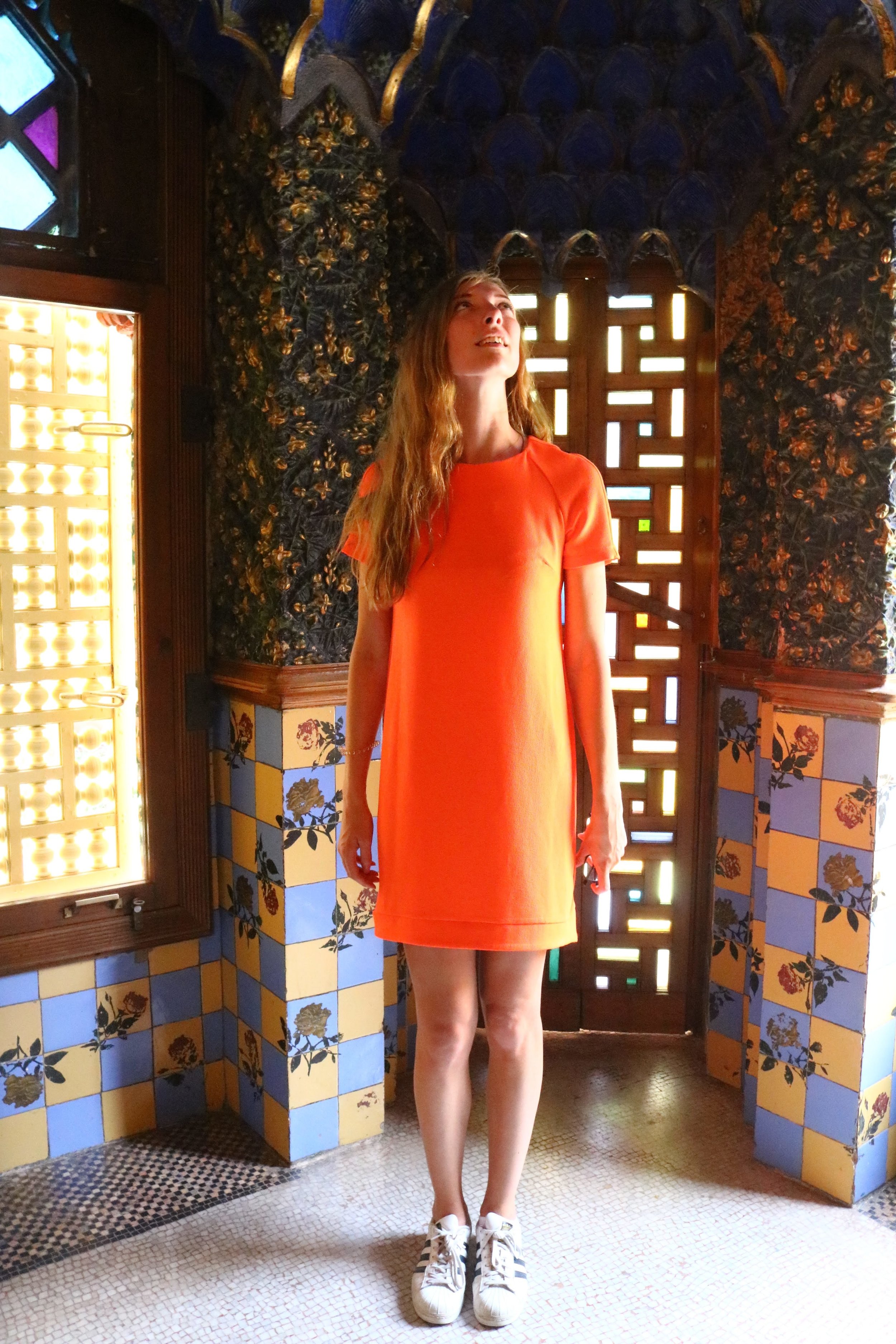 This is one of those Instagram places in Barcelona that you probably found yourself wondering where exactly it is near the Sagrada. Everyone gets those gorgeous shots of La Sagrada Familia with the trees framing it and the perfect wall for them to sit on? Look no further. What you’re looking for is Plaça de Gaudí on the northeast side of the cathedral. If the pond has water in, make sure to get those gorgeous reflection shots too!

I’ve heard La Sagrada Familia is beautiful inside, but rather than pay the ticket price, I decided to get the views I wanted of the outside of the iconic building, all for the price of a drink (a very reasonably priced glass of wine if you were wondering).

This view is from Hotel Ayre Rosselló just a couple of blocks away from La Sagrada Familia and is one of my favourite underrated Barcelona Instagram photos. Take the elevator up to the roof, you don’t need to be a guest or pay to enter, you just need to buy a drink from their rooftop bar. I went at sunset so I could see the city change from afternoon to dusky evening and it was so worth it for a 6 euro glass of decent wine!

6. Explore the Gothic Quarter by foot 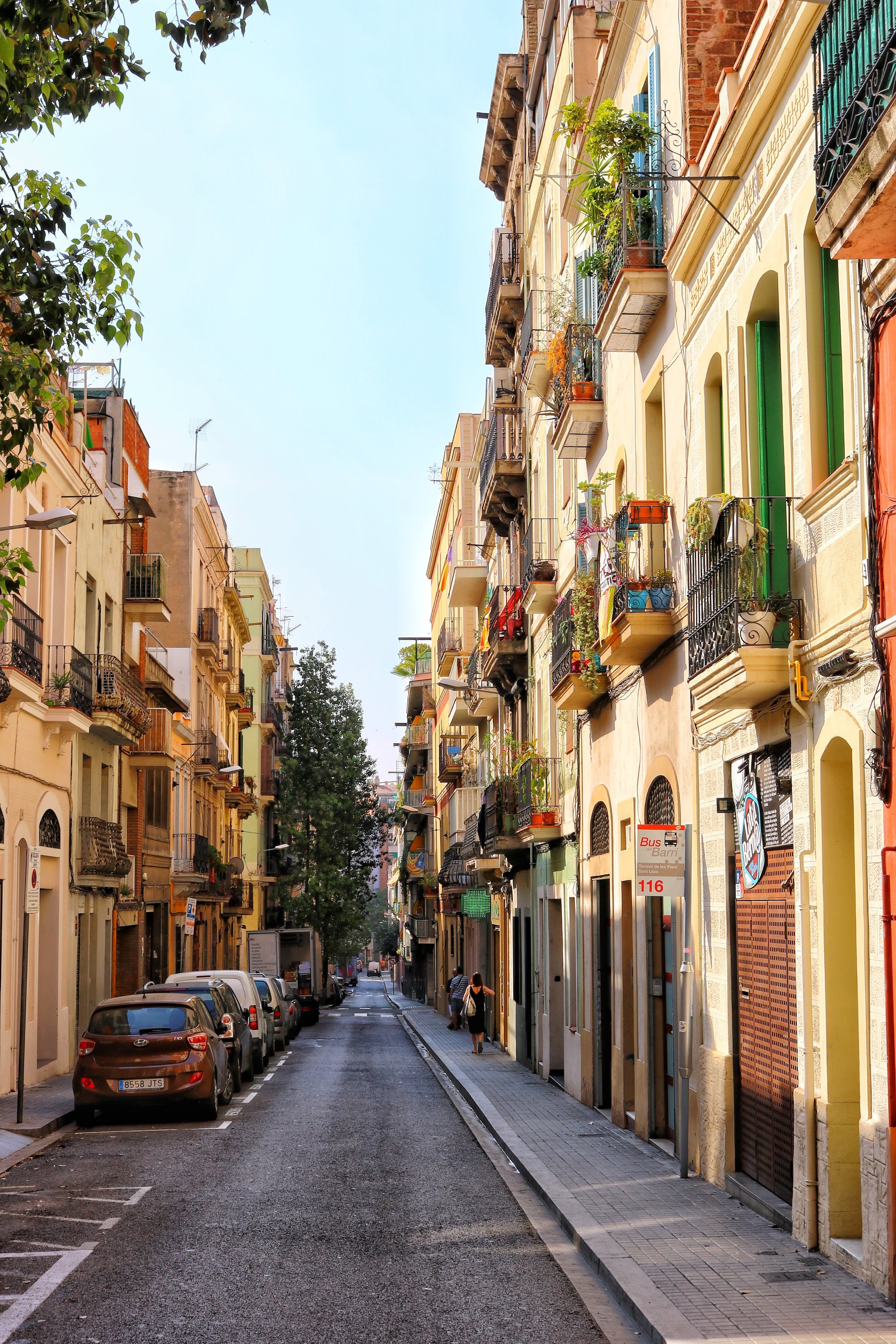 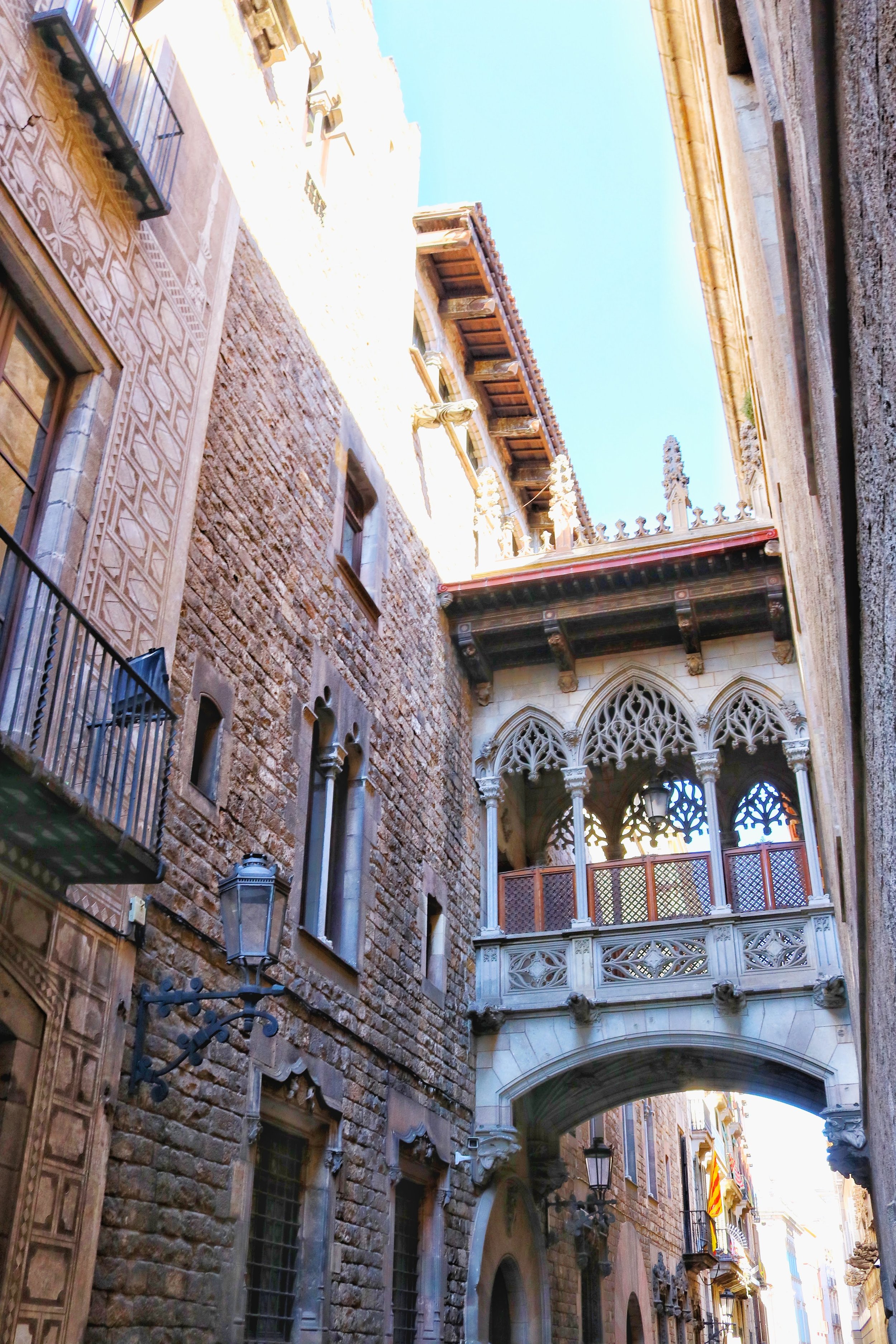 Well where to begin! There are so many Barcelona Instagram spots in the gothic quarter and pretty street photo opportunities but I would recommend going on a week day or first thing in the morning to beat the crowds.

Just keep your belongings about you please as I had a not too pleasant experience walking around the Gothic Quarter at 8.30 in the morning. My favourites are Barcelona Cathedral, the Gothic Bridge which is found just to the right of the Cathedral as you stand in the square, Carrer d"‘Avinyó street, Carrer del Joaquim Pou street for Cathedral views.

Okay so part of me wanted to visit here for the Friends reference (who gets me?) the other part of me knew how colourful this place was and how perfect the rides were for great views. Although it’s further out of the city, Tibidabo is one of the Instagram places Barcelona is making even more popular with instagrammers.

To get to Tibidabo Amusement Park I took the green line up to Baixador de Vallvidrera, then you’ll need bus 128 which links you to the park bus 111, you can use one ticket on both of these services. You don’t need to pay to enter the park, only if you want to go on a ride. I went on the Talaia ride so I could go high in the air and get the above shot of the beautiful Catholic Cathedral up there.

You’ve probably seen the colourful mosaic balcony on Instagram and this music hall is where you will find one of the most recognisable Instagram spots Barcelona is known for.

The only way to see this hall and the colourful balcony is by booking a guided tour here. It really is worth the ticket, the tour is very informative and you can spend as much time as you like photographing the balcony. You will also get an organ concert demonstration in this beautiful hall above which is spine-tingling. Find the Palau de la Musica Catalana just outside the Gothic Quarter off Carrer de les Jonqueres.

No not that one! The Arc de Triomf in Barcelona is becoming increasingly popular as a Barcelona Instagram photo spot but it’s in a very busy area on the Passeig de Sant Joan. I went here early in the morning on my way to the Gothic Quarter and snapped the above shot!

I hope this quick guide helps you find the photography spots in Barcelona that you’re looking for, I was only there for 2 days and managed all this and more so if you have any questions or tips at all, please leave me a comment or send me a message, I’d love to chat about Barcelona Instagram spots with you!

Pin this to save it for later and help you plan your future trip!