A day trip from Thessaloniki to Meteora is a great option if you’re short on time but still want to see the breathtaking and completely unique landscape of Meteora.

Located in central Greece, not far from the border with North Macedonia, Meteora is a unique rock formation area where six Orthodox monasteries are perched on top of the natural stone pillars.

During my stay on the coast near Thessaloniki, I was determined to take a day trip to Meteora and see this spectacular, and underrated, destination in Greece.

How to do a Meteora day trip from Thessaloniki?

There are three options for a Thessaloniki to Meteora day trip and they will depend on your budget.

Take a full-day bus tour from Thessaloniki to Meteora which includes hotel pick up and drop off, visiting 2 of the 6 monasteries, enjoying sunset over the spectacular rocks and a Greek lunch (extra cost).

Check out the latest price here.

This option is more pricey but perfect if you’re looking for a more specialised and tailored day trip tour to Meteora from Thessaloniki. This private tour includes a small group, private tours of 2-3 of the monasteries, learning about the architecture and nature of the area and a meal prepared with fresh ingredients from a local farm. Hotel pick up and drop off is included plus free wi-fi.

If your budget doesn’t stretch to a private tour but you’re looking for a mid-range solution for a day trip to Meteora, hiring a car is a great option if you’re happy to drive in Greece and want the flexibility of visiting Meteora by car.

I always book through Expedia as they have the most competitive prices to compare between the major car rental agencies in the area - there are several car rentals in Thessaloniki to choose from and they’re as low as £25 per day if you’re over 30 years old and under 70 with a valid driver's license.

If you’re planning to do a self-drive day trip to Meteora from Thessaloniki by car or the surrounding towns such as Parga, or if you’re visiting as part of a longer Greece trip here’s how I suggest spending your one day in Meteora.

Seize every sunset (and sunrise!)

If you’ve chosen to stay overnight the night before in Meteora and spend the whole following day there, I highly recommend starting your day as early as possible if you plan to do any hikes in the area, especially in the hot summer months when the early morning temperatures are more manageable.

To watch sunset in Meteora, head up to the Meteora Observation Deck (labelled on Google Maps) or anywhere along this stretch of road if it’s already too busy, so you can enjoy the breathtaking sunset over the natural beauty of the Meteora valley and the monasteries around you.

Soak up all the amazing views of the monasteries (but only pick one or two to visit inside!)

If you have a car, it is completely possible to see all the monasteries in a day and see their unique positioning on the rocks from the outside as well as snap some photos, but you will not be able to go inside them all in one day.

It would not be possible to really explore and enjoy all six Meteora Monasteries in one day, but it’s also not possible because not all the monasteries are open every day and their opening times change throughout the year.

Check with the tourist centre or your accommodation for the most up-to-date opening days and times for each monastery as they change regularly and based on the season.

If you’re doing a driving tour between the monasteries, there is either a car park or a parking area on the side of the road at all of them, so there’s plenty of chances to stop, soak in the view and snap a few photos.

Although do note that in peak season, parking is limited and traffic jams on the winding cliff roads are common. I visited at the end of September and had no problem with this. If you do go in peak season, I highly recommend getting up early to grab the parking spaces you want.

PRO TIP: Start at the southernmost monastery (Monastery of St. Stephen) and visit the monasteries in reverse order from the order that most tours do (most start with Great Meteoron).

Go on a Meteora hike

If you’re only there for a day, you won’t have time to do the hike from Kalambaka around the main Monasteries, but you can enjoy a nice challenging walk from the car park to reach a couple of the monasteries!

I personally loved the Monastery of St. Stephen where the rock is completely detached from the main cliff face, Monks still cross the gapping cavern in a pulley cable car!

Fortunately you don’t have to do that, instead there’s a fairly strenuous, but not too long, walk down the side of the cliff and up the winding staircase cut into the side of the rock to reach the monastery. The views are worth it, I promise!

Reward yourself with amazing Greek food

A refreshing Greek Salad is perfect after an action-packed day tour of Meteora. I had the best Greek salad and Greek dishes at a restaurant in Kalambaka town centre called Restaurant Meteora, just by the roundabout.

So if you’re planning a day trip from Thessaloniki to Meteora, or you’re in the area on a day trip, Meteora is completely possible to see and make the most of in one day! I hope this guide helps you plan your day trip to Meteora!

Pin this to save it for later and help you plan your future trip! 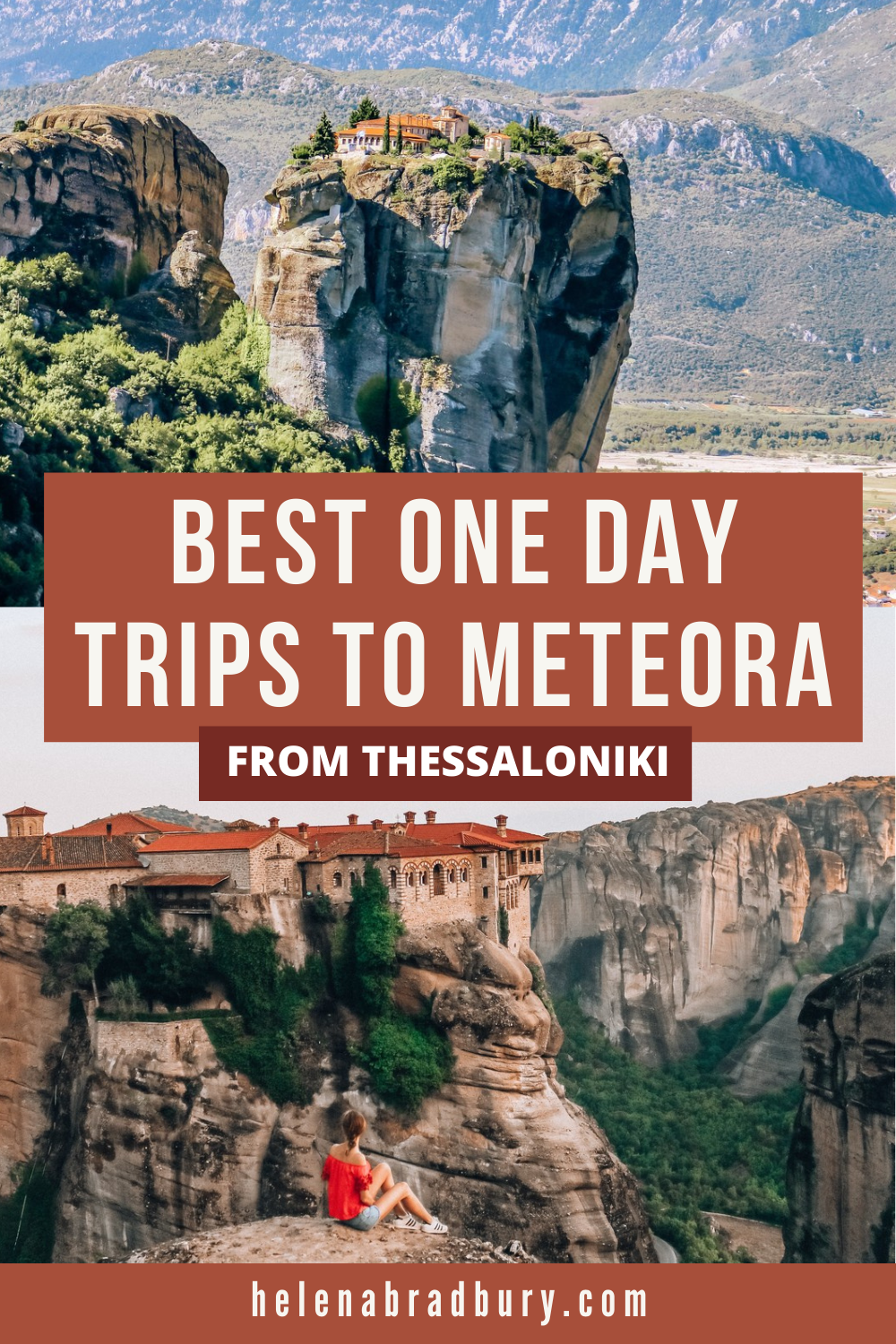 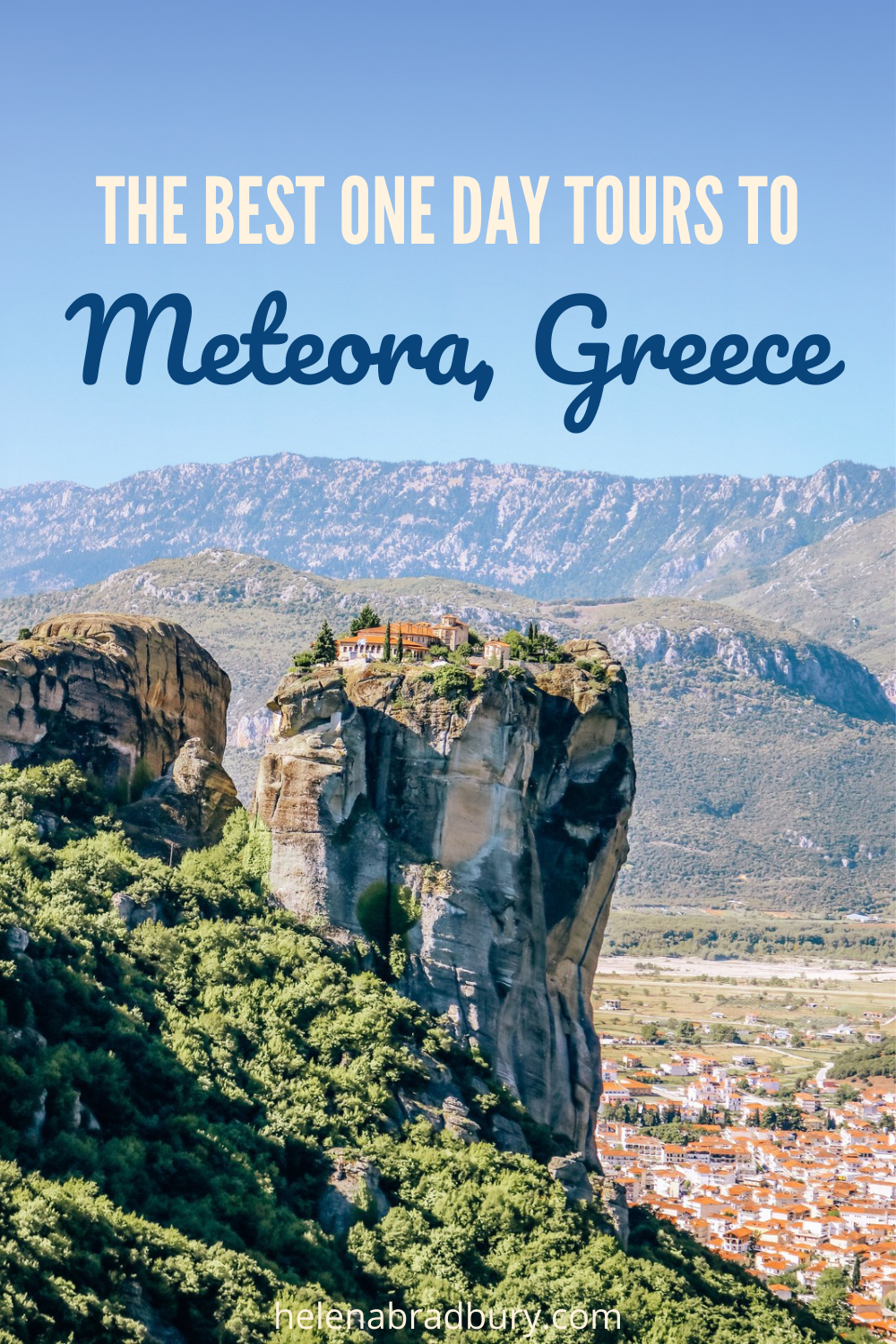 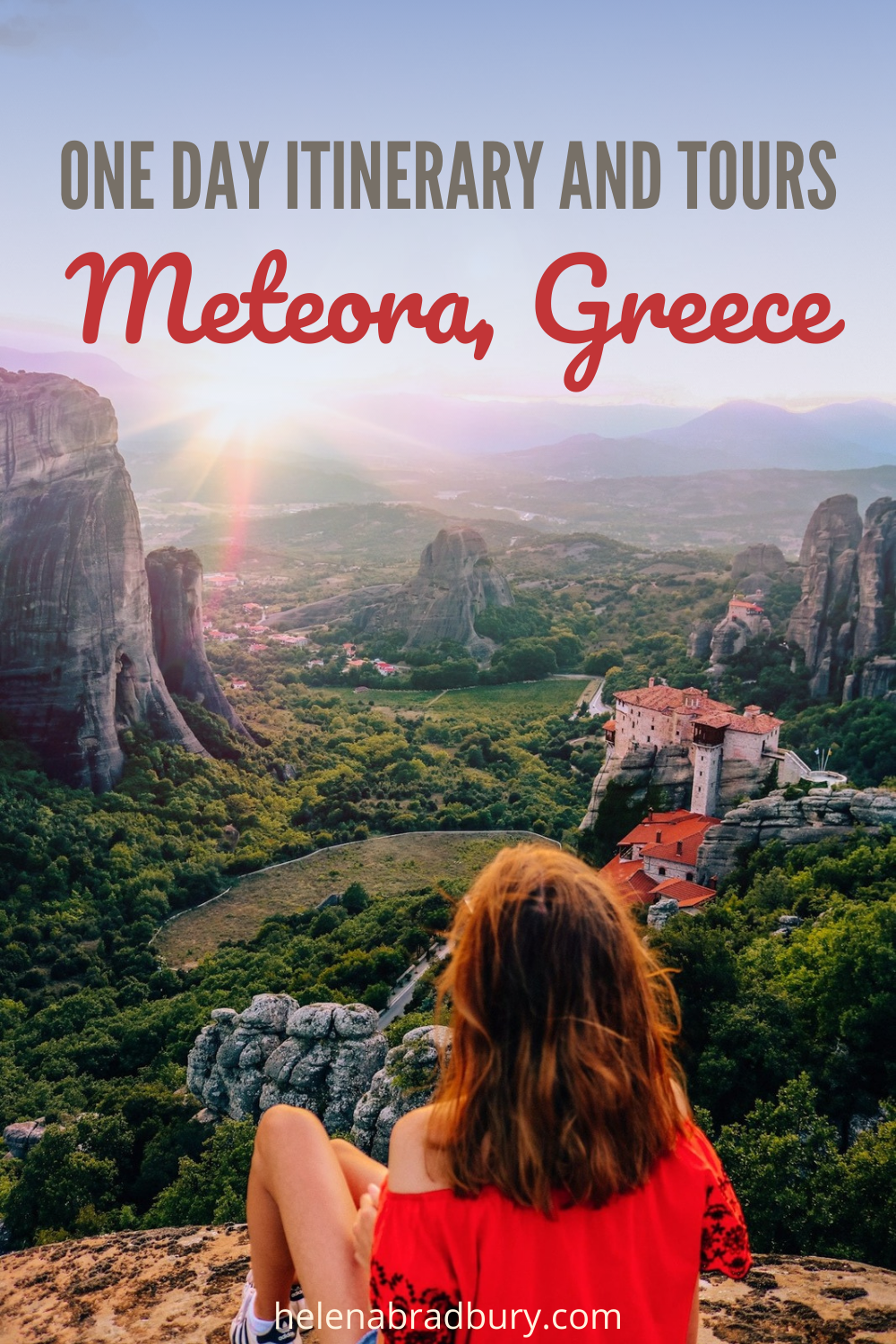 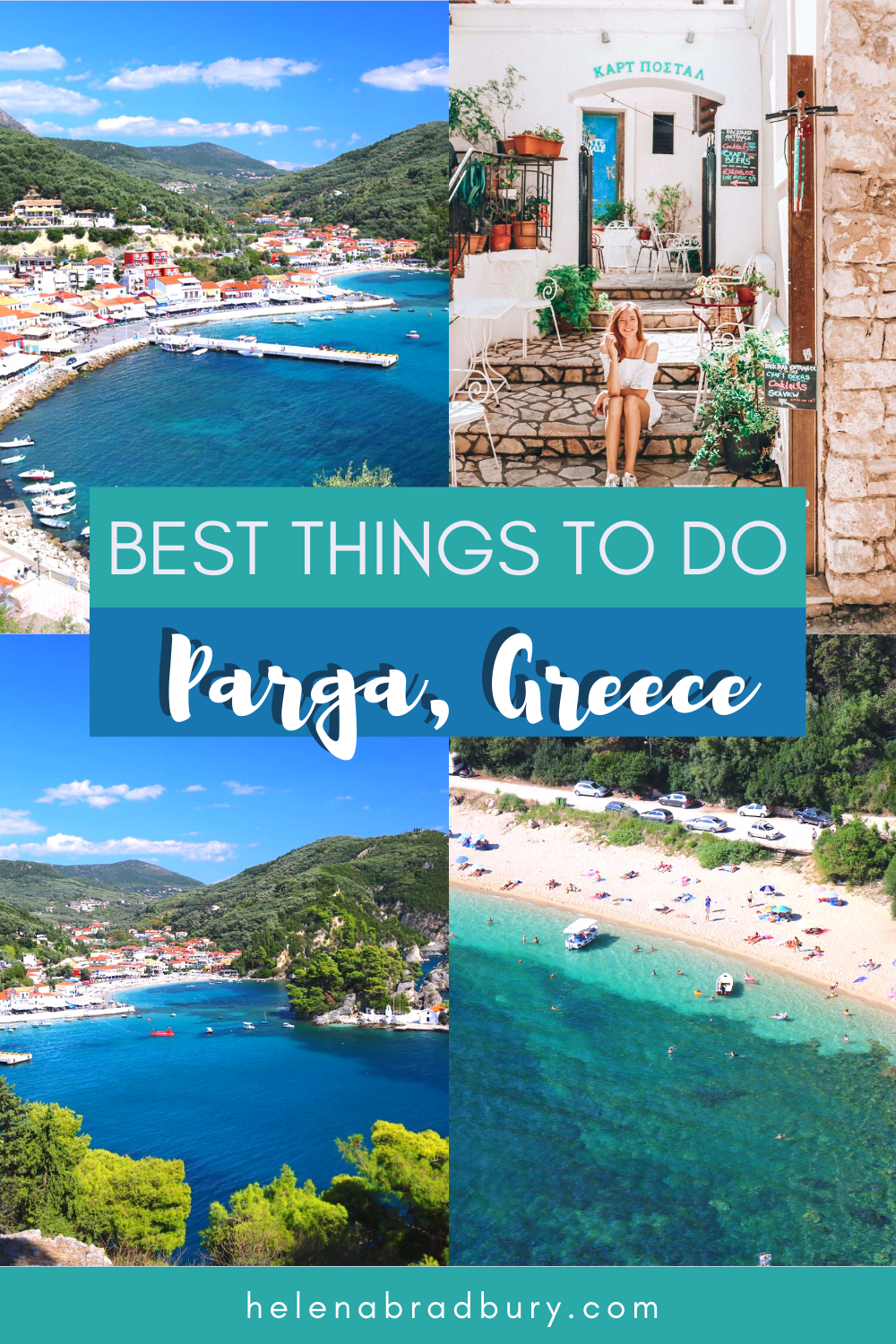 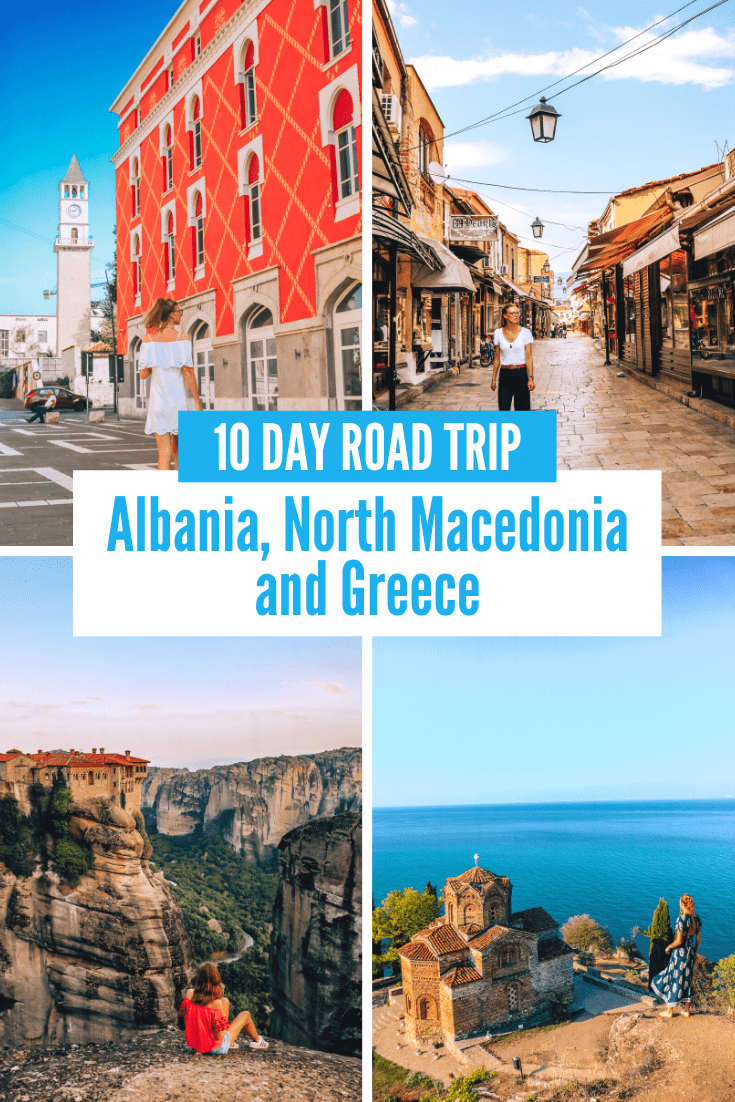