It’s probably one of the most iconic and well-recognised trains in the world, so it’s no surprise that many people want to visit Glenfinnan Viaduct on their trip to Scotland.

Where is Glenfinnan Viaduct?

The Glenfinnan Viaduct carries the West Highland train line in Scotland and the Jacobite steam train is operated by West Coast Railways between Fort William and Mallaig.

The Glenfinnan Viaduct itself is located about 30 minutes west of Fort William along the A830.

The Viaduct sits at the top of Loch Shiel (also a Harry Potter filming location for the Black Lake scenes). If you’re travelling from Fort William, Loch Shiel will be on your left and the National Trust Glenfinnan Viaduct car park will be directly opposite on your right, just before you reach the village of Glenfinnan.

The Glenfinnan Viaduct car park and visitors centre is operated by National Trust Scotland, so parking per vehicle costs £3, unless you’re a National Trust member, in which case it’s free.

The Glenfinnan Viaduct walk from the car park to the viewpoint takes approximately 10-15 minutes and the detailed description of the route is found below. I do recommend arriving about an hour early in peak summer months as the car park can get very full.

How to get to Glenfinnan Viaduct

If you’re travelling from Fort William to the Glenfinnan Viaduct, it’s a straightforward 30 minute car journey along the A830.

If you’re using public transport, there is a bus service that runs between Fort William and Mallaig which stops at the Glenfinnan Viaduct car park. Bus service 500 and 502 run 4-5 times a day between them from Fort William Bus Station so you are a bit limited on timings.

It’s operated by Shiel Buses and the timetable is here and you may need to take an early bus to arrive before the train schedule then wait for around an hour. But the Visitor’s Centre has a cafe, shop and toilets so you have somewhere to wait!

Glenfinnan Viaduct is around 3.5 hours drive north of Edinburgh so it is possible as a day trip, but it’ll be a long day! I would suggest staying overnight at Fort William and either seeing the afternoon train the day you arrive or the morning train the following day after your stay in Fort William.

If you don’t have your own vehicle, there are several Highland tours departing from Edinburgh which include Glenfinnan in their itinerary.

This 3 day Highlands and Isle of Skye Tour includes Glenfinnan Viaduct, Loch Ness, Glencoe, Inverness and a tour of the Isle of Skye. A great option if you want to see a lot in a short time frame.

We drove to Glencoe after visiting Glenfinnan Viaduct because we were driving north to south. However the route will be the same but in reverse if you’re taking this route through Glencoe from the south.

How to find the Glenfinnan Viaduct viewpoint

The Glenfinnan Viaduct trail to the viewpoint is not difficult at all, but it isn’t particularly well signposted.

If you’re at the main Glenfinnan Viaduct Visitor Centre car park, walk out the exit to the main road and turn right, walk across the road bridge until you reach the entrance to the overflow car park.

If you’re already in the overflow car park then start from here.

The top of the track has great views all along the hill, so you can set up anywhere along here to enjoy the view and get the perspective you want. If you continue up as high as you can go, you can walk into the undergrowth or up the hill bank to get a higher perspective. This is a great idea if you’re a photographer and don’t want to get people in your shot as you can sue the heather and overgrowth to strategically block people from your shot.

However, the Jacobite steam train only runs twice a day between May and October. So bear in mind if you’re visiting in winter or early spring, you can walk up the Glenfinnan Viaduct trail but you won’t see the steam train.

Check the West Coast rail website for the dates when the season is due to start and end each year.

The morning service departs Fort William at 10.15am.

MORNING: train passes over approximately 10.45am: arrive at the viewpoint for 10.15am.

AFTERNOON: train passes over approximately 3.10pm: arrive at the viewpoint for 2.40pm.

TIP: I suggest arriving at the viaduct viewpoint at the time the train departs from Fort William because the viewpoint gets extremely busy in the peak season months and finding a place to stand can be tricky. So give yourself plenty of time to get to the viewpoint and get in position by 10.15am for the morning train, or 2.40pm for the afternoon train.

If the train is running early, we were told it sometimes slows as it goes over the viaduct to give its passengers a view of the valley from the viaduct. So this is a great opportunity to take photos of it from the viewpoint. However, if it’s running late, it will run straight across.

NOTE: the Glenfinnan Viaduct train passing times I’ve given are approximate and depend on whether the train is running on time. You will hear it before you see it so don’t panic if it’s running a bit behind. It was for us but if everyone else is still standing there, you can assume you’ve not missed it!!

The morning and afternoon trains both return the same way so there are two additional opportunities for you to see the train crossing the viaduct, although be aware that as they’re travelling back to Fort William, the steam train will be facing away from you so you will not capture the front of the train as it crosses the viaduct.

NOTE: Check the sunset times if you’re visiting in the autumn as it could be too dark to see the train at 7.30pm.

Riding the Jacobite steam train is a once in a lifetime experience and you’ll have incredible views of the Highlands on the 84 mile journey.

Tickets often sell out months in advance, so make sure to check in advance of your trip and tickets can be purchased from here.

There are two ticket types, Standard Class and First Class. First Class tickets are usually around £20 more which is well worth it to sit in the beautifully ornate and historic carriages. First Class seating is like armchairs and includes complimentary tea/coffee in both directions. There are also dining cars available.

An important thing to note is that you cannot choose your seating on the train, it is automatically assigned to you when you book. The view of the viaduct arches curve from the train is best seen from the left side of the carriage on the outbound route from Fort William and from the right side on your return journey. Unfortunately if you’re assigned seating on the right side on the outbound, you will be on the left side on the way back, which means you will not have a view of the arches and will need to view from the standing areas at either end of the carriage, which can get busy.

Alternatively, if you want to see the route and ride over the Glenfinnan Viaduct but aren’t interested in riding the steam train, there are other ScotRail services that run regularly and go across the viaduct. Seating is not reserved for you and tickets are cheaper so this is a great option if you’re on a budget and want to guarantee a good view.

If you have any more questions, let me know!

Pin this guide to save it and help you plan your trip in the future! 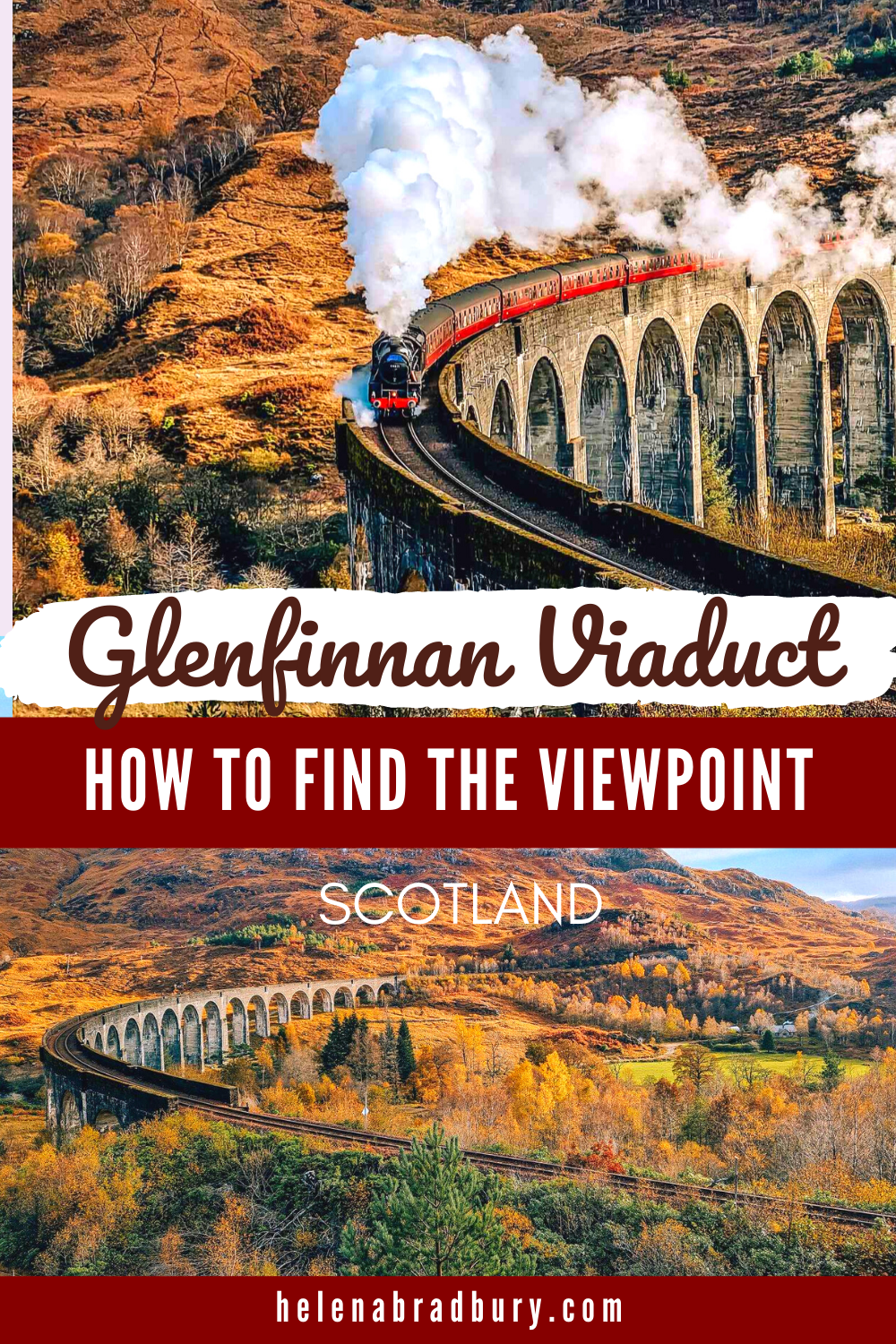 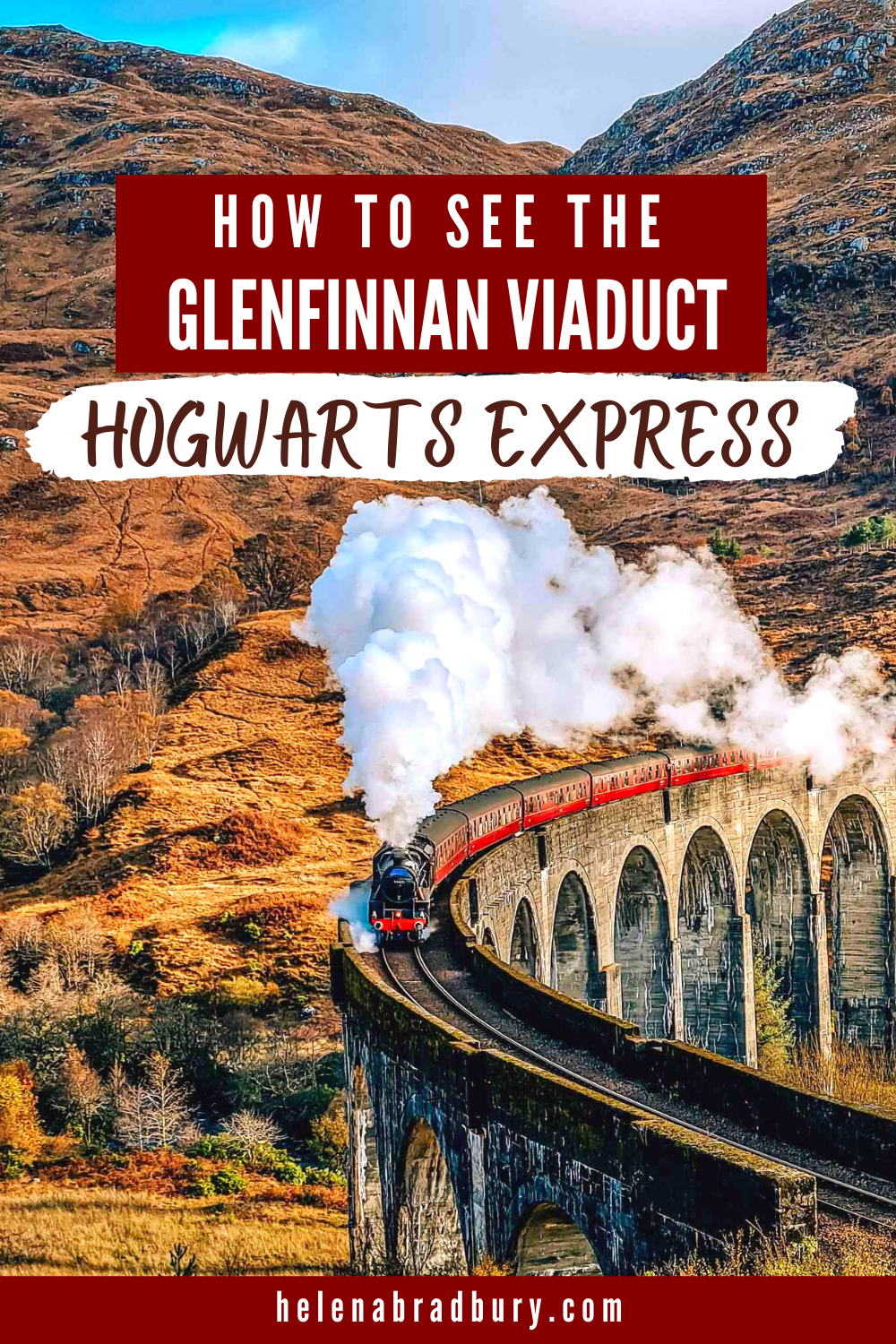