On a recent 3 week road trip in Germany, I was blown away by how many of the prettiest cities in Germany are in the south of the country and I loved how easy it was to reach some of these quaint towns in Germany on just a short day trip from Frankfurt, Munich or Stuttgart.

So read on to discover the best German towns and the most beautiful villages in Germany!

The most beautiful towns in Germany: the best Germany towns to visit

Undoubtedly one of the prettiest villages in Germany, Beilstein is a tiny quaint village in Germany located on the banks of the Moselle River in the famous Moselle valley.

Beilstein itself comes alive during the summer months when the cobbled streets are filled with al fresco dining, vines snaking across terraces and wine tours and tastings available.

Outside the summer season the town is much quieter and while it loses some of its vibrancy, it doesn’t lose any of the charm in its timber framed houses and cobbled streets.

Also located in the Moselle Valley and one of the larger towns in the area, there’s no doubt that the town's position on the banks of the river with the castle towering on the cliffs above makes it one of the most picturesque towns in Germany.

Park along the riverfront and then wander back into the town and see the Marktplatz and the unique tower of the Mosel St Martin Church.

The 11th century Cochem Castle is situated on the cliffs above the town, offering stunning panoramic views of the town and the Moselle Valley. Castle tours are available every 15 minutes and there’s no need to book online in advance. There’s also a restaurant, Burgschänke Die Reichburg, which offers incredible views while you dine.

Alternatively, head to the opposite side of the river for a beautiful landscape view of the town and castle and take a stroll along the banks of the river.

Often overshadowed by its bigger neighbouring city of Cologne, Bonn is definitely a beautiful and underrated city and I’d argue, much prettier than nearby Cologne: much of which was destroyed during the war.

Bonn itself feels more like a town than a city, but with plenty of amenities, shops, bars and restaurants which is why we chose to make it our base while we explored some of the region.

The beautiful streets and architecture are most famous during the spring when the famous ‘Blossom Street’ brings tourists to the city. The Blossom Street in Bonn can be found on Breite Street. 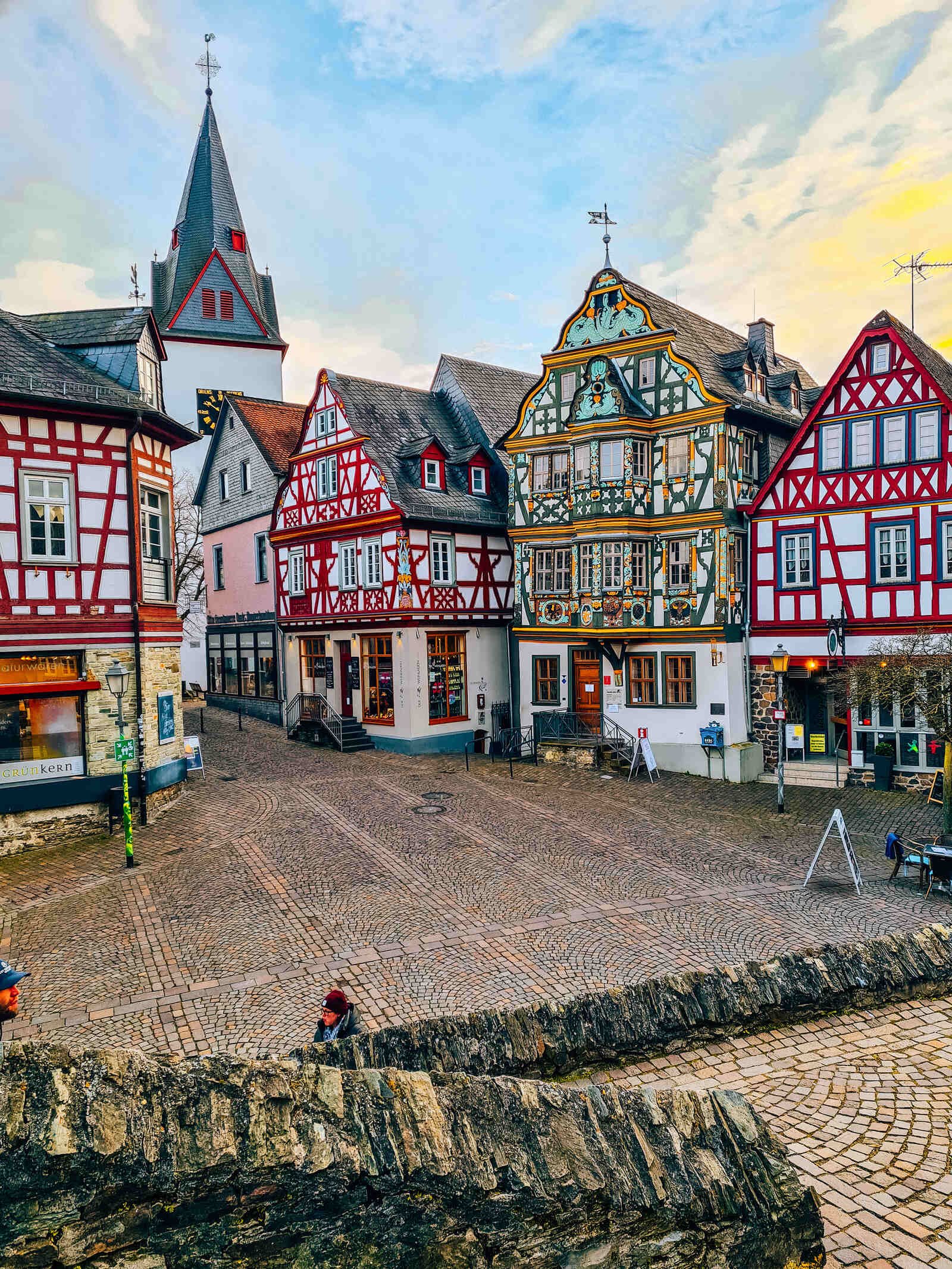 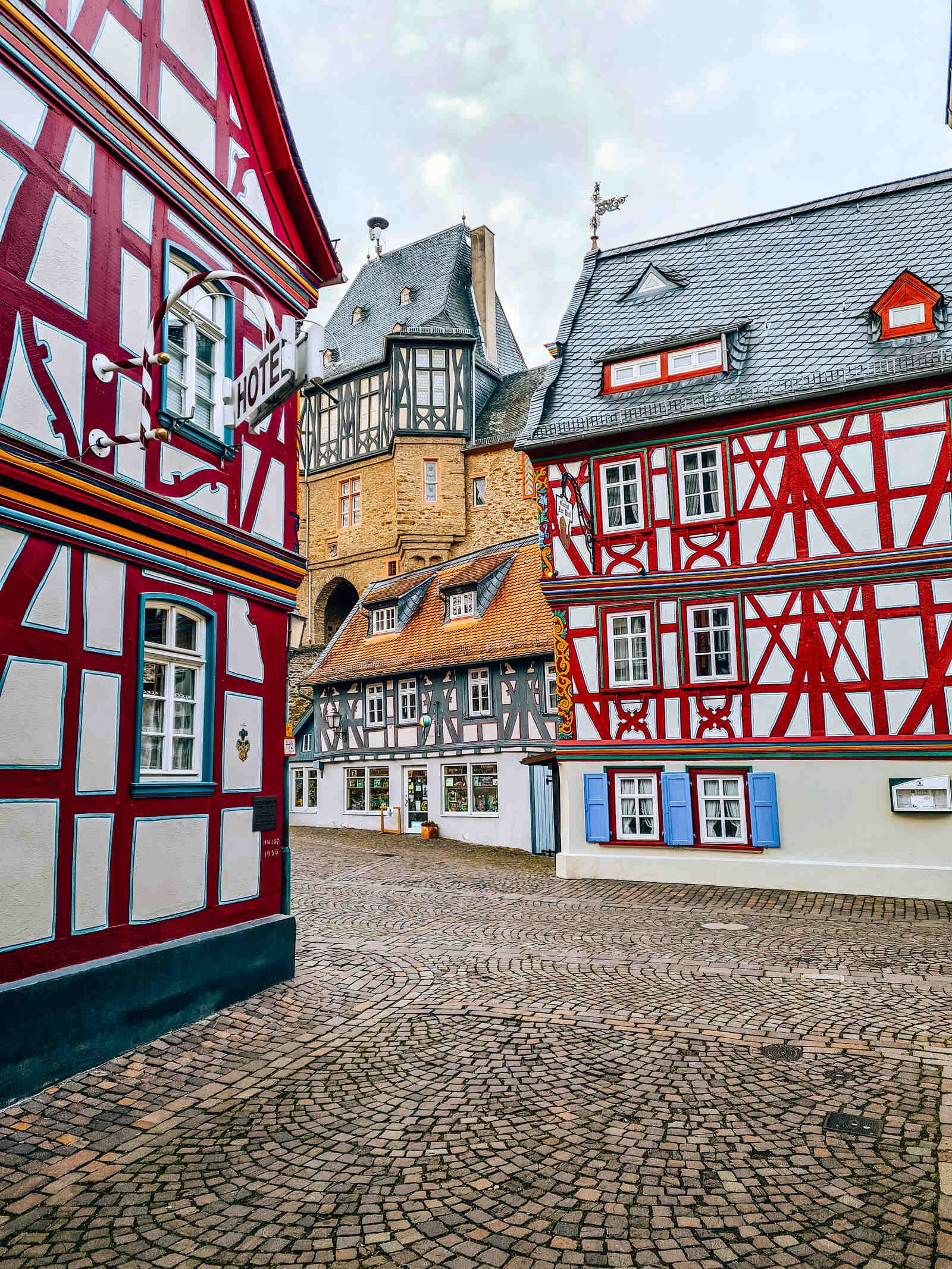 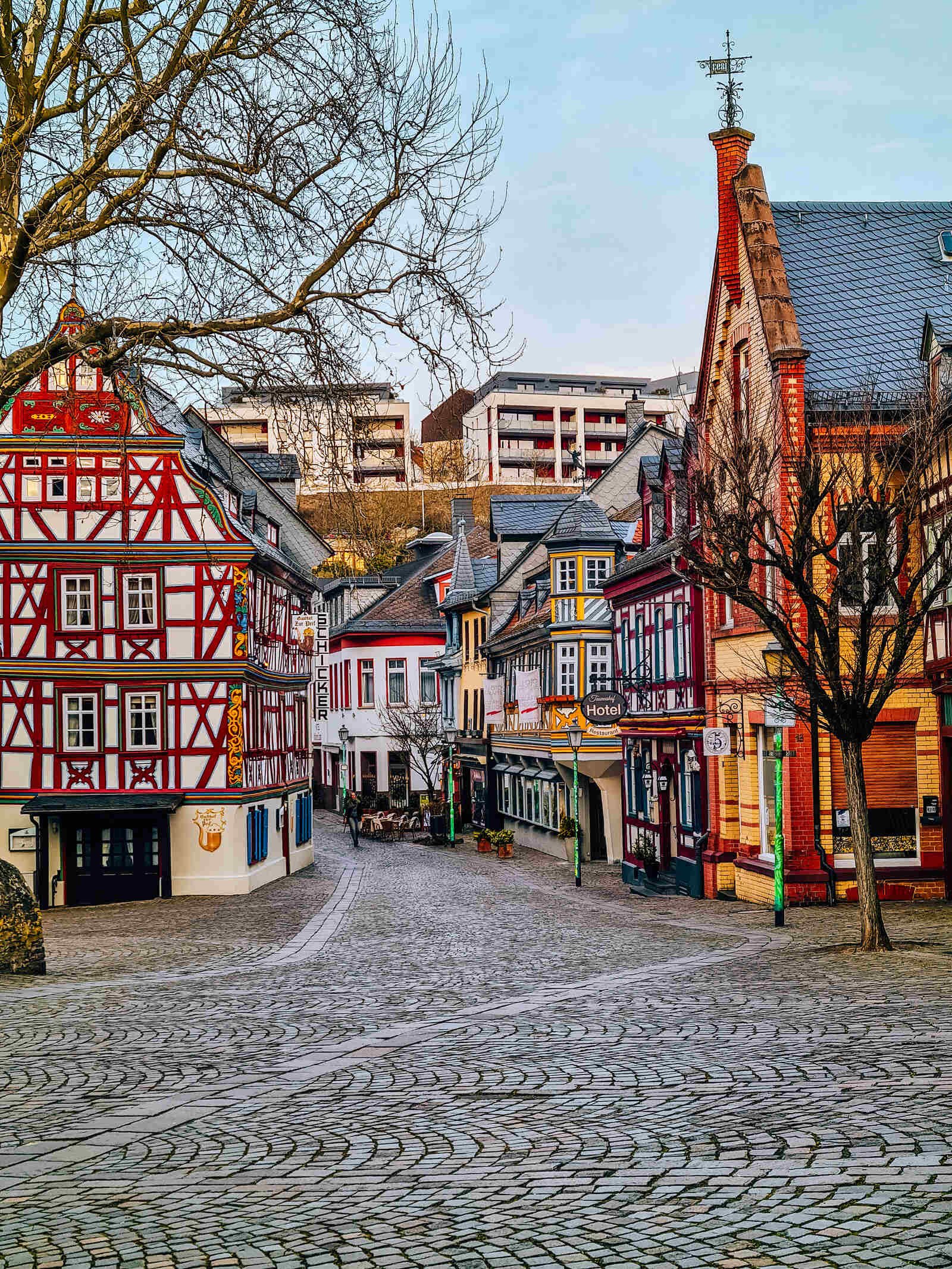 Probably the most unexpected surprise of this trip was Idstein, one of the most charming towns in Germany and easily reached on a day trip from Frankfurt.

I think Idstein is one of the best small towns in Germany for examples of medieval architecture, timber frame houses and is part of the German Timber-Frame Road route.

Dating from 1102, this historic town is incredibly well preserved and the oldest preserved house there dates from 1410!

Sit in the marktplatz with a warm drink and soak in the views of the famous Killingerhaus, historic colourful timber houses, and see the Hexenturm tower which dominates the town’s skyline.

Another charming city right outside of Frankfurt is Mainz.

Mainz is famous for its medieval timber frame streets and houses as well as its market squares, with the famous red columns of the Renaissance fountain in Marktbrunnen.

The dominating Mainz Cathedral is also built of red sandstone and is a spectacular landmark to visit in the city.

Located in the North Rhine Westphalia region of Germany, Freudenberg is most famous for its identical rows of white timber frame houses. When seen from above, these look like toy houses or a medieval model village.

If you’re looking for cute towns in Germany to visit or Instagrammable German towns, this is a must visit!

Of course everyone knows Frankfurt and it's famous as being a big financial and industrial hub in Germany.

However I was also blown away by the city’s Old Town and feel like it was probably the most beautiful city in Germany that we visited.

We also loved the riverside area too, with lots of green space, people outside and enjoying the good weather, cafes and bars, plus great walking and cycle paths too.

Miltenberg is one of the best small towns in Bavaria for seeing colourful medieval timber frame architecture.

The town of just 9,000 people is charming and situated on the edge of the River Main, with beautiful views of the river and the towers of the red sandstone church, St Jakobus.

Located just 1 hour south of Frankfurt, Heidelberg is a thriving example of old towns in Germany with plenty of modern amenities, shops, cafes, attractions and restaurants.

Heidelberg is located on the Neckar River and don’t miss a walk along the river, the old town centre, the medieval buildings and thriving cafe scene in the market square and the red sandstone remains of Heidelberg Castle on the hill over the town.

The town is also one of the famous German towns thanks to its university, founded in the 1500s, making it a young and thriving town with students and young professionals. 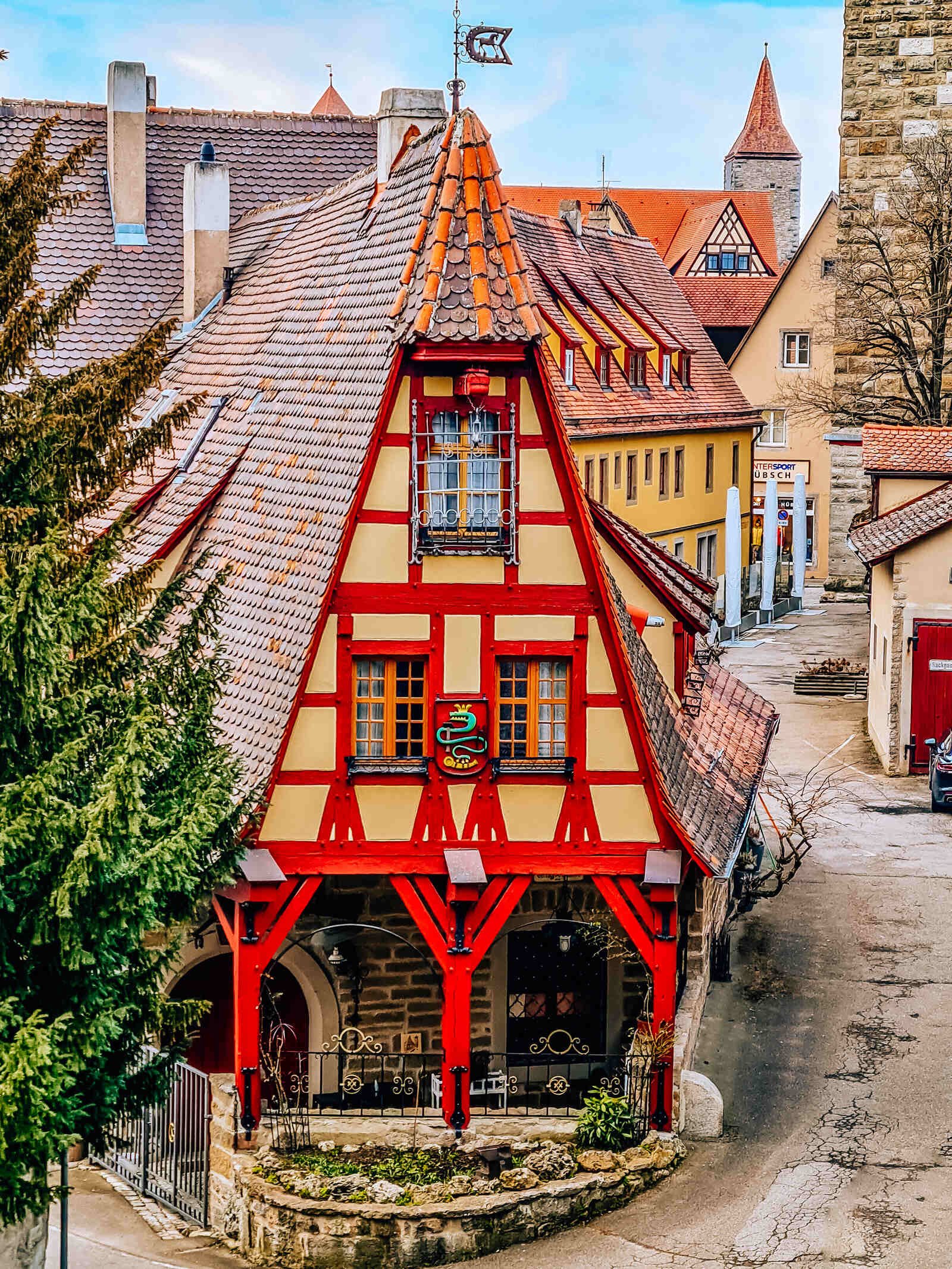 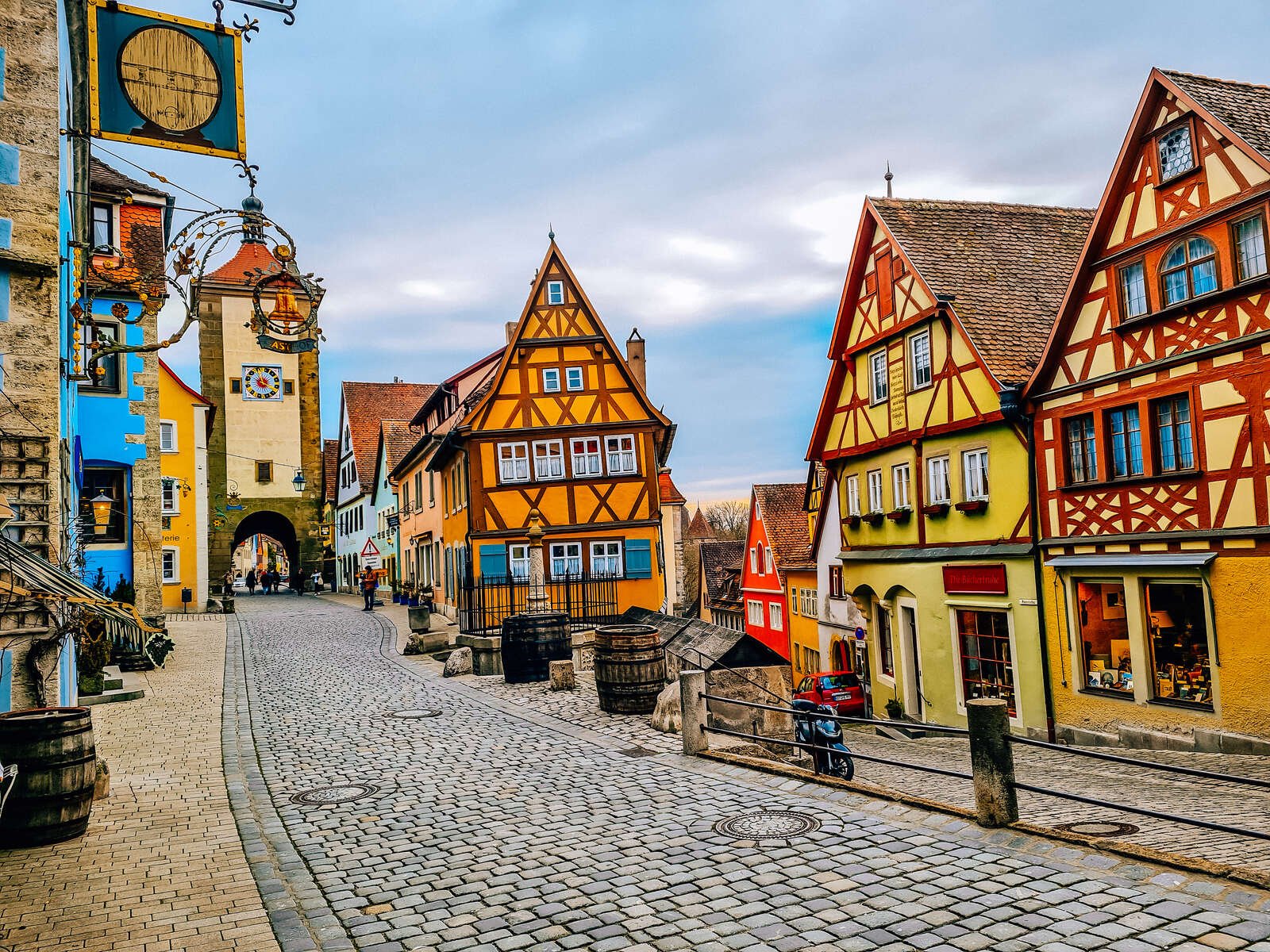 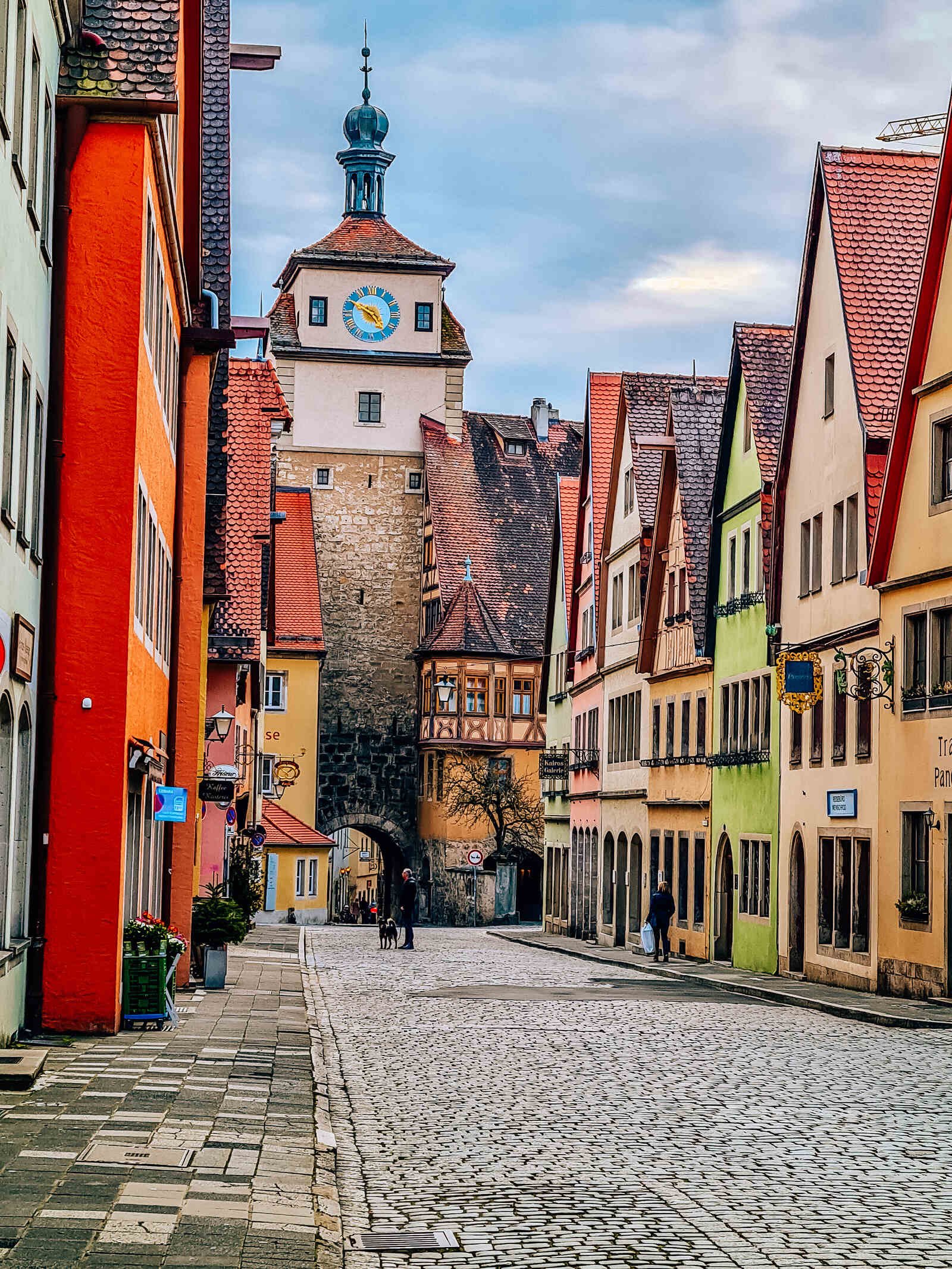 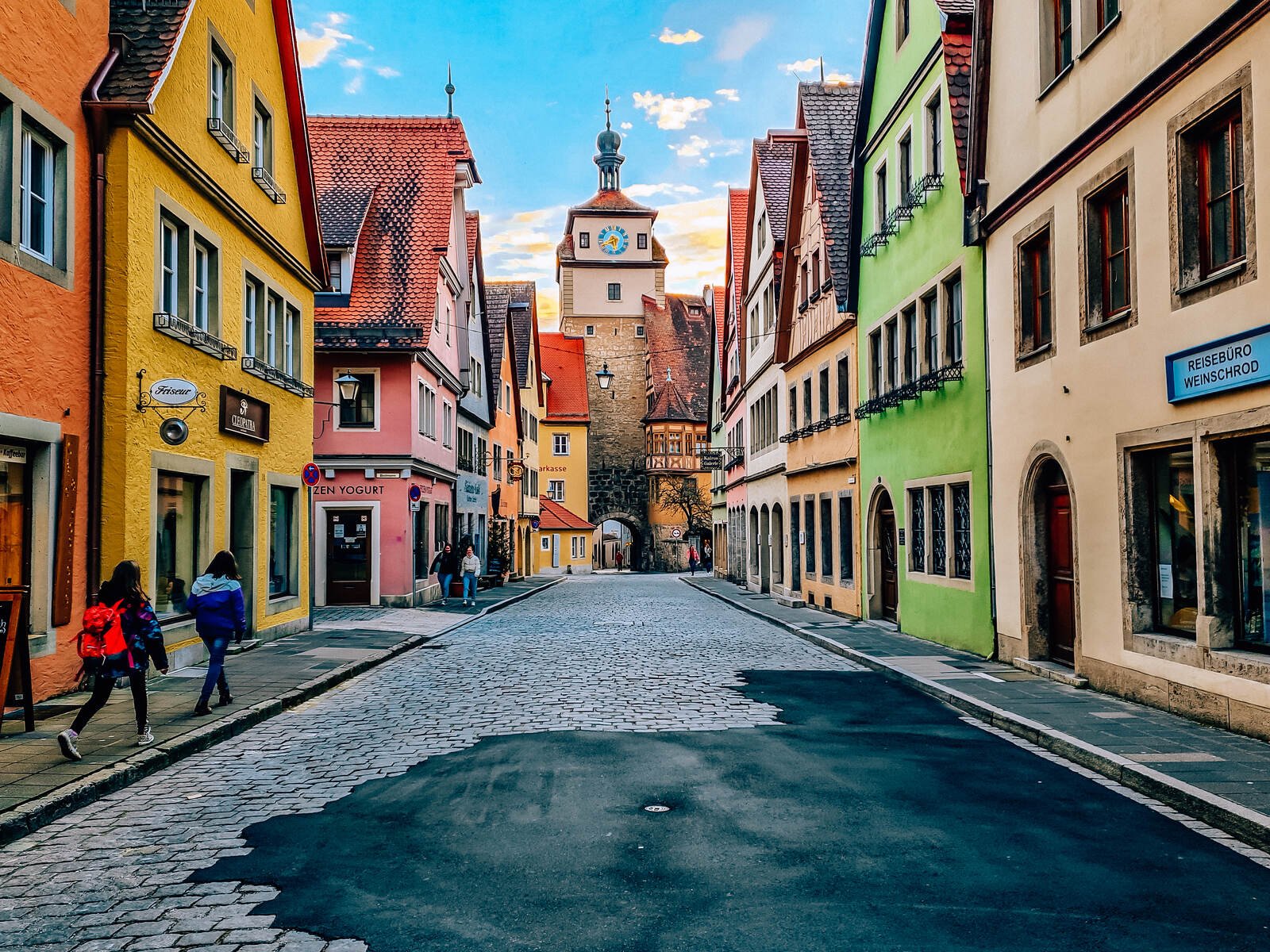 Of all the most beautiful towns in Bavaria, there is no doubt that Rothenburg ob der Tauber is one of the prettiest towns in Germany, and also one of the most famous!

Rothenburg ob der Tauber is located in North Bavaria and is possible to see as a day trip from Frankfurt. The town is characterised by cobbled streets, timber frame buildings and colourful houses.

Rothenburg is proclaimed as one of the best medieval towns in Germany because of its very intact and well-preserved town walls, complete with gates and towers which once fortified the city. You can now climb and walk the walls for free - make sure you do to see beautiful views of the town.

Rothenburg ob der Tauber is also famous as a film location, with major movies such as Harry Potter and the Deathly Hallows and Chitty Chitty Bang Bang. While much of the town is also said to be an inspiration for the fictional town in the Beauty and the Beast movie.

While Rothenburg is magical at Christmas and thriving with events and festivals in the summer, we visited in early spring (March) and were able to see the town virtually empty during the middle of the day, except for locals, which was a real treat and felt like we really had stepped back in time.

Make sure to try their famous Schneeball pastry. Meaning snowball, this is off cuts of short crust pastry, rolled into a ball and deep fried then covered in toppings such as chocolate or icing sugar.

I’d say this was the most beautiful town in Germany that I saw on my trip and it’s 100% worth a visit!

We drove through Esslingen completely by accident and just had to stop and admire the gorgeous old town, another example of the most beautiful small towns in South Germany.

The striking red townhall in the main square is beautiful and we were lucky enough to experience the town on market day when the square was packed with stores, fresh produce and great food.

Take a stroll over Agnes Brucke bridge to see a unique perspective of the town and where the canal area is.

Although I wasn’t as charmed by the old town of Munich as I was by Frankfurt, there’s no denying that Munich is a spectacular old town to visit.

I particularly recommend climbing the tower of the Old Town Hall for spectacular views of the city, the old town and the town square below.

What we loved the most was the historic beer halls, the architecture and the artwork inside combined with the traditional outfits of staff, great traditional live music and great beer - no wonder Munich is the home of Oktoberfest!

This was another unexpected surprise during our Germany trip as we originally went to visit the stunning castle perched on the rocky cliff above the city, but were also pleasantly surprised by the charming town area too.

Don’t miss the castle, located along the Danube River, it gives real Hogwarts vibes! The stroll along the river is beautiful too and it’s well worth spending an afternoon here if you’re in the area.

This one is slightly different because it's more like a mountain town, located in the Black Forest area of Germany, close to the border with France.

We only came to visit some friends but were blown away by this gorgeous mountain town with chalets on the hills and snow still lining the mountain roads.

If you’re looking for an outdoor adventure holiday, the Black Forest and a stay in Seeback is a great option and also within easy reach of Stuttgart in Germany and Strasbourg in France.

My favourites were Rothenburg ob der Tauber and Idstein, both of which I highly recommend if you’re able to visit, perhaps on a trip from Frankfurt.

Hopefully you’ve found this guide useful to find some of the most famous and most beautiful German towns.

PIN THIS FOR LATER TO PLAN YOUR FUTURE TRIP